So... Rode 220 miles from Twisp over the North Cascades Highway, up over Washington pass... a couple of days ago... 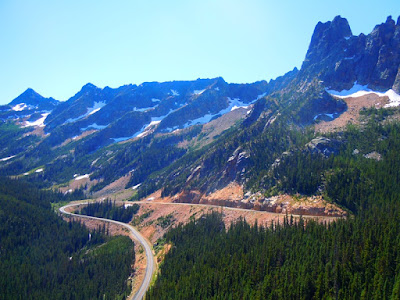 That's a sweet ride through there on a sunny day! Break out of the knots of traffic and you can do an asphalt dance, sweeping through the Cascades...

Stopped in Winthrop on the return run to our camp, east of Twisp... and found a place to come back to yesterday for a late lunch and a beer... The Old Schoolhouse Brewery.

Not a thing to complain about, except for me wonderin'... where'd all that other oil go? and why?

Mysteries in the Cascades. :)

Ahhhhh.... What Choice Does a Rider Have?

Those posts I've read, 'bout the tribulations of other Bikers don't help... and I feel a lil' guilty, bein' as how easy I'm livin' these days... but... what can I say, it don't change the low feelin' you get... When, no way around it... you have to admit it... Somehow, You busted your scooter.

She started usin' oil coming back from the Dakotas... and continues to consume it at a rate of a quart every 400 miles giver or take. That's a lot of oil. The weird thing is... She don't smoke. The pipes aren't all sooted up... and there's not a leak, anywhere. Not a drop...

But... the oil level is down, after every ride... So the only thing I can conclude is... she's got a busted ring or two... and she's burning it, smoke or not.

So, that leaves me with that gnawing worry, each mile; where's that oil goin'? How? Why? What's the repair gonna cost me? Where's THAT gonna come from?

I mean, not fixing it would be akin to a man refusing antibiotics for an infection in his leg... 'cause the cost would cut into his beer money too deep.

Some folks would say; "It's only a machine. It's only a thing. Get over it." Those of you, that are Riders... and not just someone who sits on a motorcycle to get from one place to another, know what I'm talking about... Those others, never will...

That bike is a part of me now, like my Heart... It's grown into a piece of my soul. Bummer though repairs might be... What other option does a Rider have?

I just read of the self destruction of another Biker, after reading the latest post, The Road to Hell, on Motorcycle Philosophy which was the trigger for this tirade. If you came here today, looking for some laughs and humor, today is not the day to find it. You should probably click away from here now... Otherwise Read on.

'cause I'm about to launch into another Cowboy Biker Motorcycle Philosophy Tirade;
Murder by Suicide and The Baloney of Compromise Supported by the Arrogance of Selfishness.

Have you ever heard it? "You ONLY think of Yourself! You are so SELFISH! When are you going to think of ME?!"

Am I the only one to hear the Arrogant duplicity in that statement?

A man, or woman, has the God Given RIGHT, to think of themselves. Soh-Si-Uh-Tee demands they sacrifice their lives, their blood, their sweat, their property, for everything and everyone around them; and then assaults then with all sorts of Vile accusations, if they are so Bold as to divert the tiniest bit of their energy or treasure, to give themselves,just the sliver of a taste, the slightest personal pleasure, of their own ambitions and dreams.

The cleverest, if we do resist that theft, tell us that; To be "Good People" we must Compromise in life.

That, the LIE of COMPROMISE, in truth is one of the vilest and most perverse words/ideas man has ever created.

So, when the COMPROMISE is done, the first party, who brought NOTHING, yields in 'compromise', and only gets half their DEMANDS... while the second party, LOSES half of who and what they are, beaten down under the obscene guise of COMPROMISE.

Well, half until the next Demand comes along... then another "half"...

The simple fact is; If You Love someone, either as a Lover, or as a Friend, IF, you respect them for who they are, your lives fit together AS THEY ARE... or they Don't. If demands to change occur... I don't know what it is, for sure... only, that it isn't Love... or Respect.

(OK, demanding that someone stop beating you is NOT an illegitimate demand for change, but again, NOT what this is about, and you know it!)

The They that I indict, is Society in all its forms. From the public at large, beating down on a man with its crushing weight to the wife or husband, who tells the Lie, "I love you" while doing everything they can to reshape you into what THEY think you could be.

The FACT, that THEY have LESS THAN NO RIGHT... to say a Damn word about who you are or what you'll be, not only escapes them... It is INCOMPREHENSIBLE to them.

... and then, when you can't endure the pain and soul crushing weight of Their obscene assault any longer, and extinguish the glorious light that was you... They continue their assault, and insult your memory with accusations that you STOLE your life from them!!! That you were so selfish, and they needed so much more FROM YOU!!!

Even after your Death, in their obscene arrogance, they try to claim ownership of your life. They continue to make the claim "He had no RIGHT to do that with his life. What about ME?!? ... it's all I can do to not vomit.

They make the arrogant, pompous, and callous accusation that your act was one of betrayal, and cowardice and denies the FACT that your act of Desperation was the only way the Lost Soul could deal with THE Obscene lies, betrayal, abuse and  ACTS OF SELFISH ARROGANCE that were imposed on them.

The FACT that, society had consumed so much of who they were, that they lacked the strength to endure, another second of the Agony the soul stealing cannibals around them, subjected them to.

Ever wonder why, when you look at those who have taken themselves out of the game, they are almost always the best and kindest? Ever known a sorry, pathetic, backstabbing SOB to bust a cap, on themselves?
(and don't tire me with exceptions such as murderers and such about to be caught and punished... this is about otherwise 'normal' people)

Think About It! and THINK, before the NEXT Time you utter those words; "You Owe Me"... or "When are YOU going to think of me?"

Think about the souls that took themselves away... can you EVER remember them asking, in life; "When are you going to think of ME first?" I'll bet you can't. It doesn't fit the sort of person who feels so much pain, suicide is the only way out.

The truth? Many of, if not MOST, suicides can be argued to be acts of Murder, by the grasping cowards that populate great swaths of society.

I apologize if I've offended. Unless you find yourself in that "great swath of society" I've indicted. If one of those, Wake UP!