I Think that Pendulum I Mentioned Earlier... is Kicking My Ass

The weather has been sweet... and here I am in the Arizona desert... not riding.

Fact is, Sonja has been resting on the back of the truck since she rolled up there when I picked the ol' rig back up after the blown tranny was replaced... some few days ago.

I'd just as soon throw a leg over and twist a throttle, say f$%k it and just go... but... it's kinda hard to do that when you pull off the gas cap and look in there... and the onliest thing you see... is the bottom of the tank.

Some would think that's not a huge problem... you just fill it back up. Buuuuut that there IS the problem. I've discovered that it takes more than my western good looks and amazing virility to claim ownership to a few gallons of gasoline. :-/

So, here I sit... bangin' away at the keyboard, trying to get some paying work done... or some work that has the potential to pay (it used to!) and hope for the best.

Then you pile on top of that, the season I dislike above all others... and... Bleh! I'm tellin' you... sometimes this gettin' down the road in life is a piece of work girls!

All a guy can do... is all he can do. Bang away at the work he knows in the best way he can and see where he ends up.

Just hiding out in the desert... lookin' for a pig to kick.

Grab Your Handles and Ride
Brian
Posted by Brian at 11:05 AM 5 comments:

Keep it Between the Ditches

It's been said that;


Sometimes you find yourself in the middle of nowhere...
and sometimes...

In the middle of no where... you find Your Self.

Things... I've railed a bunch about things. Maybe too much. All about not letting them rule me... own me.

Think about this a minute...

If you (I) go the other way and spend  a lot of time, working, watching, guarding against and double checking all in the effort to make sure that we don't get ruled and owned by Things... so as to protect our Freedom...

Only this time, life gets' burned up worryin' about ensuring the Non-possession of those same damned things! It gets to bordering on Nuts! and our Freedom leaks out like water from a rusty bucket.

It's all about extremes... Like a motor... Too hot; Bad. Run too cold; Bad. Somewhere in the middle is the operating range.

So, in search of the holy grail of answers... People talk about seeking "Balance" in life. Like a "Balanced" eco system. Only problem with that is, such balance exists only in Disneyesque fairy tales.

There is no Balance in nature. No such thing. Nature is a world of violent extremes.

Things swing from overpopulation to catastrophic population crashes. Calmly grazing deer to the savagery of a wolf's assault. Sunshine to blizzards. Droughts to Floods. Feast to famine. Overgrown forest to burned out grasslands.

Life for a biker is flush to broke. Healthy to sick. Standing up to laying in a ditch. Employed to unemployed. Rolling down the road to stuck with a broken machine. Fueled up to out of gas. New tires to bald. One extreme to the other.

When you're riding through what appears to be a time of calm and serenity... You're only in that valley between the extremes.

So, there is no balance. Control is only a fantasy. Yet somewhere when it comes to the issues of life and things... I believe there still exists an answer. I think somewhere between the unattainable fantasy of rigid control... and the wild gyrations of total chaos is the possibility of following a sustainable road.

Like one of those snowboarders in a halfpipe... back and forth up one side and turn back before the extreme... and back down and up the other side. Over and over testing the limits but staying in that sustainable Operating range.

Rather than seeking control, rather than achieving the unachievable "Balance" I see things as a pendulum. You can't stop it. It swings irresistibly back and forth into the foggy far distant future. The trick is to get into that rhythm and go with it.

Like I wrote about the weather in Alaska. You can fight it and lose, or you can embrace it, equip for it and go with it. Learn to love it as a piece of life... and just swing along with the pendulum.

You can't stop it... but maybe you can influence it. You can teach yourself to function within the established rhythm.

Maybe if we learn to keep a low key, subconscious eye on the world around us... kind of an underlying situational awareness... we can get ourselves to seeing that pendulum starting to swing  too far... starting to gain a lil' too much momentum or force... Whether that be in the actual world around us... or in the world between our ears... and do it without the phobic life darkening extremes.

... If we can apply a touch of friction to slow it down... coax it slowly back into that calm, sustainable rhythm, before it starts breaking things; if we can pull it back into a cadence that is within our ability to keep step... we can avoid twisting our livers into knots.. and keep the scooter between the ditches.

Kind of an abstract thought that occurs on occasion when I get a mite too close to the bottom of a beer bottle... I hope I'm right... I'm kinda weary of untying knots.

Labels: Joy in Living, Knees in the Wind, Motorcycle Philosophy

Someone once asked me; "Why do you always insist on taking the hard road?"
I replied;
"Why do you assume I see two roads?"

As the sun set on another day... a lot of those old sayings rattled through my head in an unending kaleidoscope...

This day saw the transmission in the truck cratering... or mostly so. 5th gear blew out...

Parked out in the high desert is not a place to repair broken transmissions, and for a lot of reasons, I can't just take the old rig to a shop and leave the house here... So, tomorrow morning, I'll hitch up and with fingers crossed, I'll do my best to limp the 60 miles or so to lower altitude (with a failing tranny) and closer proximity to the repair shops and services.

Remember the old cartoons... where the guy is running on a treadmill or train track or some such... and some drooling, firebelching "Thing" is chasing him? It's right on his tail. He can feel it's breath on his neck...but he just keeps running straight ahead?

And you holler at the screen; "Jump OFF! Jump OFF!" but he can't, because he's not got the time or space to take even the slightest step to the side. Though he'd like to he can't just step aside and let the beast just rush on by, even if he DID have the time to THINK of another way?

That's just exactly the world I feel like I've lived most of my life in. There never seems to be a period of time long enough to catch my breath and work things out in my head (let alone the economic side of life). I just keep running against the wind, doing things I don't necessarily want to do... because I can't corral enough "Time" (spelled; time and cash)... to work out a better way.

That is I'd bet... the toughest hole to climb out of... for people that feel like they're in a hole; Finding even the peace and serenity... in big enough pieces... to allow themselves to think straight.

... and even when they do... if they do... when they come back from that "Place" it's like the world knows what they're up to, so it whacks 'em with ever greater coldness and rapidity... The spirit takes a beating.

Even the times I've stacked up enough cash to "build that window of time"... one missed step and it all went cascading down the drain like sand through your fingers... arrrrrrrrrrrrgggggggghhhhhhhhh.

It becomes pretty much the paradox of having to harden your heart to give yourself the time to open it up. The trouble with that being; Once a Heart is Armored... Softening it again is a double tough chore.

There's only one thing a fella can do; Cowboy Up. Put one foot in front of the other and keep on keepin' on... until he can find that faint little trail that leads to sunny slopes. (how's that for stringin' a half dozen cliche'd phrases into one idea?)

Like watching the sunset that started off this post... you know there will always be another sunrise. You just have to somehow, find the material to maintain hope... for me... keeping it in the wind nurtures that hope. 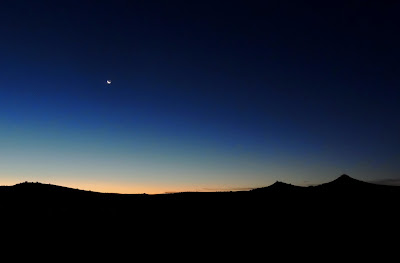 Grab Your Handles and Ride
Brian
Posted by Brian at 8:32 AM 5 comments: