There's plenty of places you'll find pictures of all the classic tourist stops along the Alcan. I'm not gonna beat that Ol' horse too much here... I'll just try and publish little bits that caught my eye. 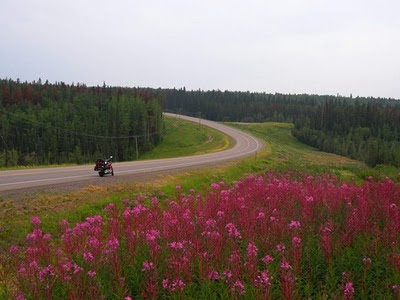 and that... in bits... is the best way to "Focus" on this road... the ALCAN is just too freaking huge... staying fixated on the big picture is just guaranteed to overwhelm and intimidate you. Try to just focus on one lil' part, and then move on to the next... one bite at a time. You'll get another of those "More Harmonious outcomes"! :o) 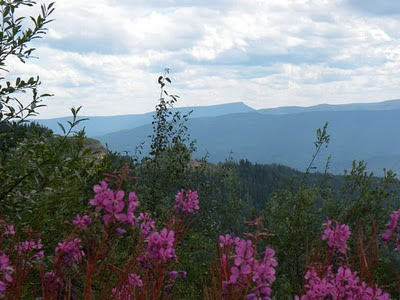 There are those that say riding the Alaskan Highway is a trip of monotony... Huh?... I don't get it... That's like saying that sitting on a park bench while a thousand of the most gorgeous women on earth parade by in tiny lil' bikinis...is monotonous! That'd be a tough job to deal with huh? :o)

One thing I can say is... this road teaches you to admire the small pleasures... like the sun coming out after 200 miles and more of steady rain... with your rain gear leaking! :o) I promise... when that first ray of sunshine hits your cold wet kiester... you grin. 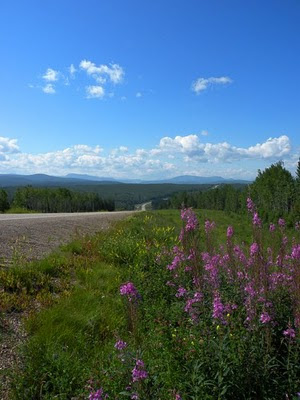 A comment 'bout the "Bad Road" the ALCAN is supposed to be... So far, I'm sitting in my tent outside of Watson Lake in the Yukon territory, all the gas 'bout this bein' a "Tough" or a bad road... is a bunch of hooey... probably cranked out by people wanting ever'body to know just how much of a Billy Bad Ass they are... It's no rougher than a hell of a lot of roads south of the Canadian Border. ***I may have spoke too soon... keep watching for an update! :o) 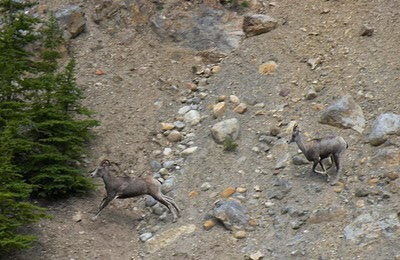 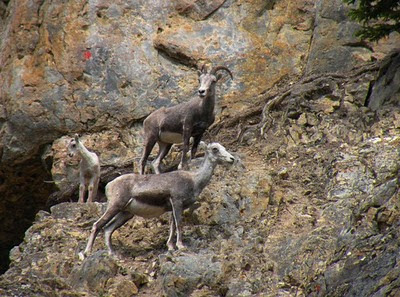 The only thing I've found tough at all, so far, especially for a Motorcycle Rider... are the distances, and range between fuel stops. But mostly the simple endurance required to cover those distances, through all conditions... sitting with your Knees in the wind.

Which brings us to that Billy Bad Ass part...

and last for today... a bad day for one poor fella... along the ALCAN Highway... 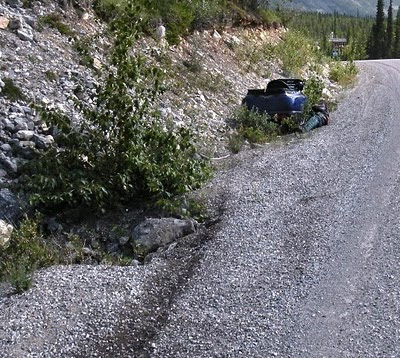 What you're lookin' at here is the tail end of a Blue Tike... sittin' down in the Bar ditch... and its' driver, laying on the ground... lookin' under it. See that skid mark in the gravel? Just missing that big hole, tree and some other rocks an' debris?

He was comin' at us... a truck in front of me... when he just veered across in front of the truck leading me... and into the ditch. Good thing he veered left... and not right... there just weren't Anything to hit on the other side...nothin' over on that side but a whole lot of air! :o)

Seems a stabilizer on the axle broke... with the trike goin' pretty much out of control as a result... that Ol' country boy was dang sure lucky that the only thing bad that happened... other than a very broken trike... was a very ruined pair of shorts! :o) my guess is... something didn't get inspected quite enough... or... maybe was built a trifle too light?... I don't know the first thing 'bout trikes... but havin' the thing run out of control like that... well... it just don't seem right to me.

Share your stories and opinions;
*Tell us Which you think is the... The Best Touring Motorcycle
*Share...  Your Personal Motorcycle Philosophy with us!
*Tell us about your...  Great Motorcycle Roads
Posted by Brian at 12:51 AM

Brian,
THANKS! [for taking me along, even if my view is from this boring old office everyday :( ] What a trip!
Just took a similiar trip with a nice young lady on this blog: http://www.livinginmycar.com/
Geez ya probably passed each other!

Been following you on the "going boondocking" site for quite awhile. Now check both blogs each day.
So a sarcastic "thanks alot" for infecting me with the bike-bug.
Never had one, but this 51-yr-old tired butt is feeling a bit woozey looking at Roadstars all over the internet ( A 2000 pearl white Millenium had me drooling!).
Now just have to convince the wife it's time to sell the unused ski boat and try out two wheels!
Be safe and enjoy!
Scott in New England