My Raider is Rolling Higher into British Columbia

With 1700+ miles of this Alaskan Highway Motorcycle Ride having rolled under my tires... 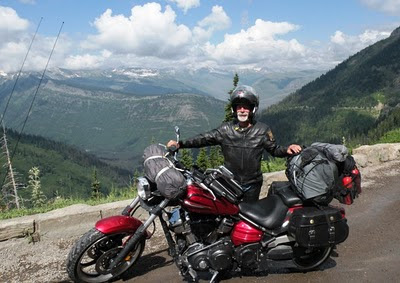 The days on this Alaska ride are starting to fall into a routine... at least until I can't find a camp and have to surrender to another motel room! ;o) It turns out that southern British Columbia is one of the main playgrounds for Canadians... hmmm... imagine that! 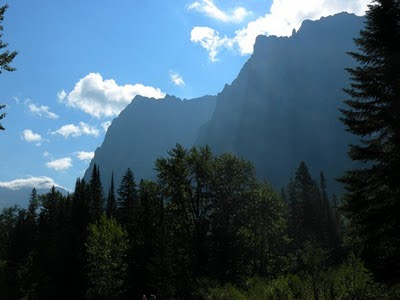 I've made the mistake of pushing to long into the day... and having campgrounds fill up... Something to keep in mind... and quit doin' it! :o)

A problem I've had is finding WiFi... I've never needed it before and apparently need to grow some skills at finding it. My aircard and cell seem to work up here... the problem is Verizon doesn't have what I consider an affordable "Plan"... so I'm avoiding what I believe to be a .49 cents a minute roaming charge! ... which is why my posting may be 'spotty' as I roll through to the Alaskan border...

I should be able to go back on Verizon... where I can get signal... once I get back to U.S. Territory...

One other... little issue... is judging distance... making the conversion from kilometers to miles... so a fella has a better grip on how far he's goin' today... well... duh! right?o) 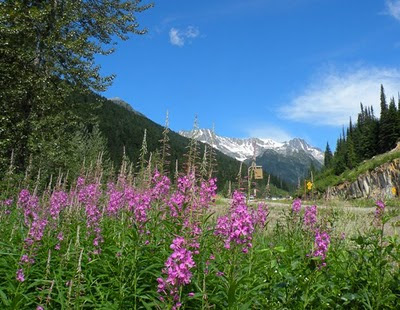 Otherwise... the roads in up here, from Western Montana to Kamloops up  in British Columbia, Canada... how are they when you're thinkin' 'bout Motorcycle Roads?

One word from my viewpoint... Suh-wheet! Lookie here... even over in that bit of Alberta I ran through, running up to Cardston, north of Glacier and Waterton National Parks... where you get out on the rolling plains, it's gorgeous.

Now, I know that some will complain that straight roads on a Motorcycle  are boring... I say... if they're running through beautiful lands... with visions in every direction... I'll take 'em.

But, if you're needing twisties and mountains that hurt your neck tilting it back far enough to see the tops... British Columbia should suit you! 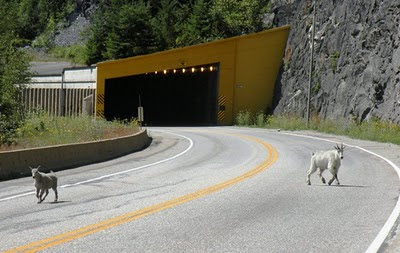 Be watchful though... this pair jumped up over the concrete on the left... just as I came rolling up at about 70 mph... with a string of cagers pushin' me!

...and like others have said... a month to make this Alaskan Highway Motorcycle Tour is pushing pretty hard, considering the distances... you have to keep on rolling when you'd really like to stop and look a lil' more... but... you take what you have and do the best with it right? 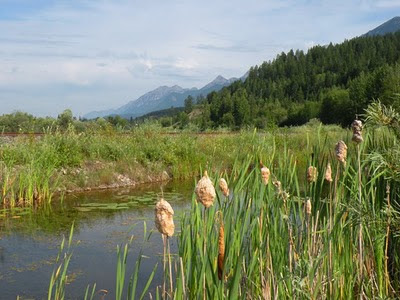 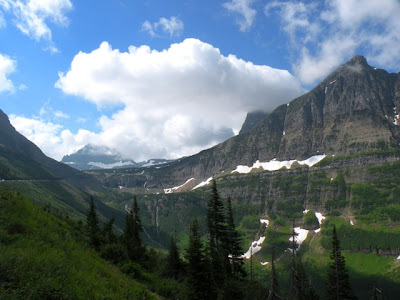 Some of 'em just have to be recorded in your memory. :o) 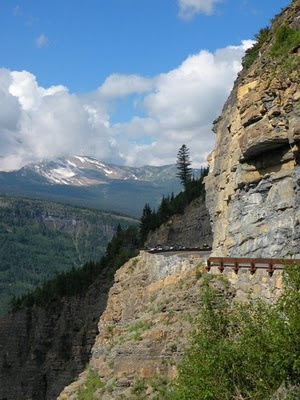 Share your stories and opinions;
*Tell us Which you think is the... The Best Touring Motorcycle
*Share...  Your Personal Motorcycle Philosophy with us!
*Tell us about your...  Great Motorcycle Roads
Posted by Brian at 10:15 PM

Labels: ALASKA by Motorcycle, Knees in the Wind, Motorcycle Roads

Welcome to Canada and to British Columbia, my home province. Enjoy the spectacular scenery that the province has to offer. Going through the Rockies is magnificent and rolling along the Alaska Highway an into the Yukon and Alaska will make you feel like you've found heaven.

I do enjoy your blog tremendously and am getting close to taste that freedom that RVing has to offer.

Man what absolutely lovely scenery. So glad you are posting your trip so we can enjoy it too. Love the picture of you and the Raider and I couldn't think of anything to improve it but it is missing something. It is missing Heidi's smiling face with her red s--t-kicking boots riding through Canada with you. Too bad she decided not to make this trip with you. Could you be a little lonesome for the little lady??? How long do you think it will take you to get back into the good old states?
Waiting for each post. Can't wait to see your pics. How far are you going into Alaska?? Hope you have your skeeter repellant, understand they are something else.

Boy will I be glad when you get back within the borders of the US Ride safe my friend.

I'm getting kinda worried. It isn't like Brian to keep us in suspense on his trip. I hope all is well and he is enjoying himself. Happy roads, Brian.