... about a week ahead of schedule.

When the rain kept me moving it put me farther down the road than I'd figured to be. I slowed down a bit, here and there, but let's face it... waitin' out what folks up there had told me was a "summer of rain", in a three man tent... by my lonesome... just didn't make sense to me...

I talked to a few other riders, along the way, that had set up in a campground for a couple days...and then just continued on, in the rain... for much the same reason..."We didn't come to sit in the tent... We came to Ride" was how one fella put it to me...

So... Yesterday, Kerry took me on a fine, twisting, zig zag through some of the ranch land of southern British Columbia. Weaving back and forth from our night camp in Barriere... 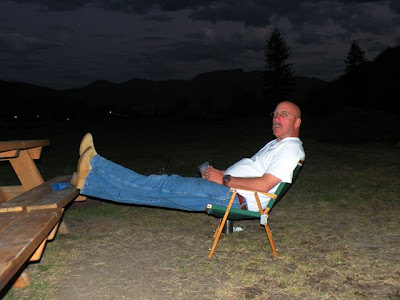 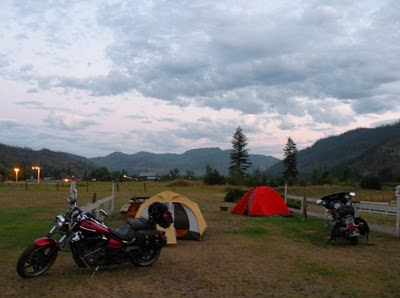 ...to Kamloops and back around to Spences Bridge... where we had to say our goodbyes.

He headed back north to Prince George and I rolled south through Fraser Canyon, bound for the border. 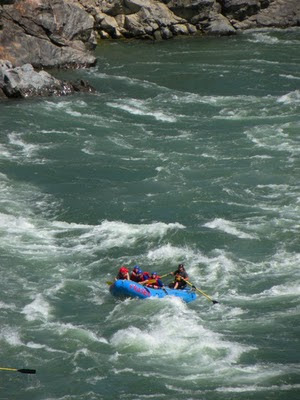 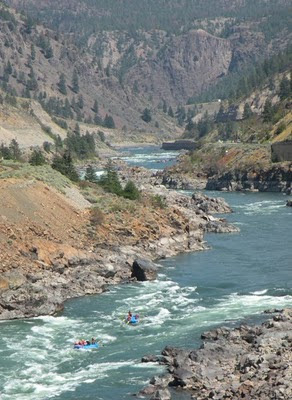 It's my suspicion that the Wal Mart down the road did some fine business that afternoon... selling fresh underwear! Me?... I'll stick to the safe and sane activity of straddling a hundred horsepower bolted twixt two wheels... and scream it down the two lane with my pegs scrapin' the asphalt in the twisties! :o)

Late in the day... I got a refresher course on contrasts... From lookin' out at Millions of acres of undisturbed wilderness, all along the several thousand miles... of two lane I've traveled in the last, nearly three weeks... to the hustle and unadulterated Mania... of Seattle!

Now... I don't believe, as much as I love the Wild Country, that I have left, what it'd take to live and prosper in Alaska... or the Yukon... but... I've got even less of whatever kind of endurance a person has to have to get along in the collection of craziness that is an American City these days...

Had a fun night last Thursday... "Shadow Moss"... a blog reader provided a space for my bedroll just south of Tacoma... and even gave me a quick tour of part of Fort Lewis... where she's employed as a private contractor ... and where I took my basic training... a Looooong time ago...  kinda of interesting, to go back to 'where it all started' so long ago... :o)

Yesterday I rolled on south from Olympia on I-5 to get to hwy 12 that runs east across Washington State. It sure feels good to be back in sunshine and warm! :o) Found a camp east of Mt Ranier and set up for what I hoped would be a quiet evening... 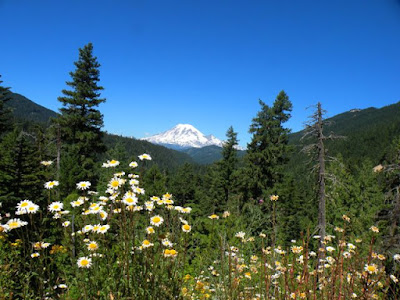 ... only to be just 'bout put on the ground by a Navy jet... clippin' the tops of the trees! Whooeee! I'll have to stop at Wal Mart today, to repair the damage... wouldn't have been so bad... but the sucker turned 'round... and come a roarin' back up the valley... even lower... I swear that bugger has to have pine needles in his air filter! :o)

Today... I'm on the Homeward leg of this two wheeled journey... and looking toward moving off on the next part of our RV Boondocking journey... much to do back in Colorado for that... so I'm kind of torn... which way to roll... south along the coast a ways, before turning toward the sunrise?... or just start angling east from here?... and make some easy rides across the Mountains and deserts...

... Gonna have to think on it over morning coffee... somewhere down the road...

Either way... I'm Bound for the Colorado Plains in the next week or so...

Share your stories and opinions;
*Tell us Which you think is the... The Best Touring Motorcycle
*Share...  Your Personal Motorcycle Philosophy with us!
*Tell us about your...  Great Motorcycle Roads
Posted by Brian at 10:31 AM

Well, it is surely a blessing to be able to read that you are back in the US. Now I can quit worrying about you being safe. Enjoy your ride my friend. You were very close to my daughter, who lives in Bonney Lake, just a little south of Seattle. Sure wish you would have ridden by, grabbed her, and brought her home to me. Sigh--that is not to be, she LOVES it there. We are going to fly up there and spend Thanksgiving with her and Rob and in the month of May we are gonna make our BIG trip with the camper. Maybe you will be somewhere where we can meet on the road. Until then, take it easy on that return journey and be safe. I know Heidi is waiting for you at home.