Making the Run From Almo, Idaho to the Canyon Rim at Flaming Gorge

I wasn't looking forward to the ride out of City of Rocks that next morning. After that washboardy hammering of the earlier afternoon, it wasn't what I figured to be a good start to a day of Highballin'!

But, I fretted on that road out the east side all for nuthin'...


While the west side coming in from Oakley is a 1st gear washboardy ride, rough as most would want to roll a road bike over, the east side going back out to Almo is a nice, smooth rollin' hardpacked  trip. No Worries!

I soon caught Hwy 30 running east and linked up with I-84 near Snowville, Utah. 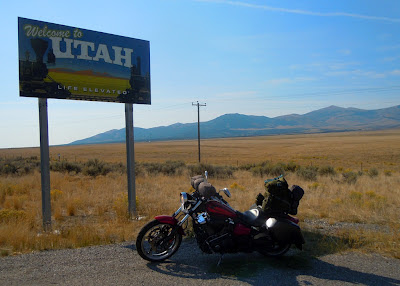 The plan was to race down that chunk of slab about as quick as I could. I really have little use for 'em and avoid interstates as much as possible. I'd catch I-80 east at Echo and jump the hell off that boring slab of asphalt as soon as possible at Fort Bridger to take Hwy 414 down through Manila and then take Hwy 44 to Flaming Gorge National Recreation Area.

Along the way, I got to feeling a lil' sorry for myself 'cause I'd felt the need to cut my trip a few days shorter than I'd hoped. I was standing in a mens room at a fuel stop and I came across this lil' picture... 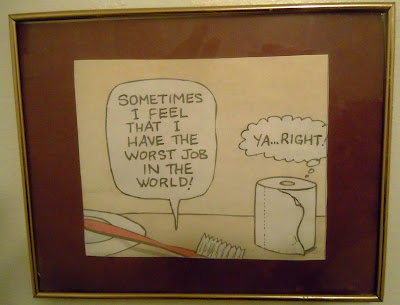 Kinda refreshed the knowledge that a lot has to do with perspective! ;) I expect there's quite a few folks toilin' away in their cubicles that'd give most of their right leg to enjoy the Freedoms I do have! So quit my whinin' right? :)

I'd fiddled around enjoying the morning back in Idaho so I wasn't riding into the Flaming Gorge area until nigh on to suppertime.

... only to discover... all the campgrounds were already closed and locked up! Geeze... I'm so weary of this crap. The forest service has handed over most of the country's campgrounds to be run by private corporations.

If they can't turn a profit they lock 'em up as if they own 'em!

When the traffic falls off in the fall, so that they can't turn a profit, they leave and go home... locking gates that never used to exist when I was a kid. The Forest Service didn't seem to have a problem running the camps then... arrrrrrrrrggggghhhhhhhh

When you take into consideration that all those mgmt. corps pay is something around 4% of the take in "Rent" on their contracts... My wife and I still own a small store in Fort Collins. I wish to hell we could have rent of only 4%!!!

Here it was gorgeous September weather and the camps were all locked up! Why'n hell do you need a padlock on an outhouse?

Last I heard the responsibility of the Forest Service was to manage the Nations Forests for the benefit of the people... NOT ... the profit of a corporation... ok... end of rant...

Well... at the Canyon Rim campground, the bozo's hung the gate in past several tent campsites... So closed or not... I set up my tent and enjoyed myself. Since they failed to leave any way to pay for the night, and didn't come around to collect the rent... they didn't get it... or that from the several other folks who camped on OUR land anyway. ;)

I know a "few" fellas that just roll their scooters around the gates and pitch their tents... Kind of a Thoreauean exercise in civil disobedience! ;)

That was another dark, beautiful night...


Layin' there in my bag with the ends of the tent fly rolled up I watched the stars and the moonrise... as the coyotes howled... and then long after sunset the Bull Elk started bugling. Awesome!

Got up the next morning early, and enjoyed another sunrise over some of the prettiest country we have to live in. Was a little melancholy though... It'd be the day I had to ride on back home...

"Going Home" and Splitting the Wind on the Road... It makes me mindful of the line in that song; "Torn Beween Two Lovers..."

But the end of the ride will have to wait for tomorrow!

Grab Your Handles and Ride!
Brian
Posted by Brian at 8:44 AM