Running Between the Fires and Nearly Lost Coffee

I got up to frost on the Bike... Frost on the tent... on the table... uh huh, it was cool! ;) So... I went to work building a cup of coffee with my brand spankin' new REI coffee maker and that Sterno stove. Luckily the wind weren't blowin' this morning! 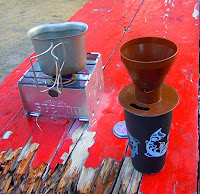 Knowin' it was gonna take a bit, I set the water to heatin' while I started breakin' camp. I had near ever'thing down and loaded by the time the water was hot enough to build my first cup...

I was plannin' on havin' two!

Always in the past I carried a lil' jar of instant. It's easy to just drop it in the cup.


The problem with instant is... you likely know... it tastes like something you scraped off your boot...

While the water was cookin' I also plugged my phone in to the charging socket that I got reinstalled last week. (this is a pic I took then of my Ipod gettin' rejuiced but you get the idea)

Anyhoo, there I am this chilly morning; camp's mostly down and the bike's warmin' up to make sure I didn't kill the battery chargin' my phone...  ground coffee got loaded into its place in the maker and I started pourin' hot water into my cup.

I can hear the water dribblin' into the cup and the anticipation of a good hot cup to warm up as I watched the sun rise had my mouth watering...

... and then the water stopped.

I mean... It just stopped. Lookin' down at that coffee maker, the water just sat there in the top of the funnel and... wasn't makin' nuthin'. arrrrrrggggghhhhh...

The grounds had worked like a cork and just sealed up. First time an REI bit has failed me. So.... I tap the thing a couple of times hopin' to break something loose and get it to flowin' again... 'cause about all I'd got was a few tablespoons of coffee...

and I did... break something loose.... The GOL DURN Coffee carrier part! KeeerrrrrrrRAP! 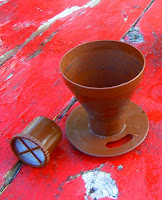 Yeah... the $%@# thing fell off right into the mug and dumped all the grounds out in the process...

Well... I'm not goin' 'thout a cup of coffee when it's all still right there in front of me...

I fished the lil' carrier cup out of my mug, which, of course, left all the grounds still in the mug with my Coffee! Well... I poured the coffee out of the mug through that strainer cup into my second canteen cup.

That sorted out the grounds and left me with one cup of well handled hot coffee... and kinda strong! :) Good thing too. I mighta hurt someone had I not got that one, single, precious cup of hot coffee...

Only had to flush the mug of remainder grounds with a bit of water and I was back in business... but... you guessed it, that cheapie  coffee maker... that didn't!...  followed the old stove into the trash can! ;)

I strolled around that Beaver Dick campground in the morning sunrise, sippin' my coffee and enjoyin' the morning quiet along the river.


Once I packed away the last of my gear I climbed on and headed west on Idaho 33 through the morning chill to Mud lake in search of that second cup of coffee and a jelly donut!

Properly fortified I made the turn north onto Idaho 28  for the run up to Salmon Idaho. 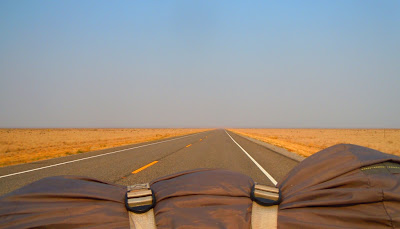 I suggest you get well coffee'd up in parts of Southern Idaho... seems there's tolerable stretches where if you don't have caffeine to keep you awake you might could doze off... the road is a lil' bit straight for some long pieces!

Me I still like that open country... It lets a mans chest expand to full volume... not all constricted like it gets down in the heavily peopled places.

A bit farther west, after you make the turn SW at Salmon leaving Hwy 28 you turn onto U.S. 93 and then Idaho 21 at Stanley... This trip I was shooting for the gap between two fires. I'd turned this way to avoid the collection of conflagrations to the north. Here, on the only good road across this part of Idaho there remained just two... A big one South of the road and NW of the lil' town of Featherville in Elmore county and another to the North of the road a ways.

'twas my hope to slide 'tween the two without getting singed.

The smoke was strong for a ways but began to thin the farther west I rolled. What can I say? This part of Idaho is some Joyous country and a genuinely Great Motorcycle road... Smoky or not! 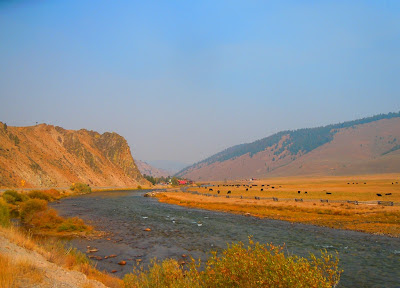 The barren country is behind you. The rivers water the land and the road finds its way through the mountains in ways that hang a shining smile on your face!

You come to a section of it, down on the Idaho 21 part where I swear, that road should easily give The Dragon in North Carolina a run for its money. I don't believe there was a straight stretch of much more than fifty feet for several miles...

I remember thinking in the middle of a couple of hard leaners, where I was close to draggin' the pegs on that bike loaded with my camp; "OK, that's pretty much 180, I better be ready for it to swap back over the the other side, it'll be comin' up soon... which it eventually did but I swear it went closer to 270 degrees before she turned back. :)

I only wish I'd hit it earlier in the day when I was a bit fresher! :) and I wished I'd had that helmet camera that got stolen a couple of weeks back... Suh-Wheet Motorcycle Road!

It's a road that tests you in a couple of ways. The pavement ain't in the greatest condition, so it tests not only your riding skills and the traction of your tires... but your Judgement as well... as in; "Hmmmm.... maybe I should oughta ease up rollin' through here!" Ha ha! Shining Times!

I dropped down into Boise toward the end of day and decided that after three days of, ridin' in the smoke, busted stoves, failed coffee makers, cold nights and an internet system that wouldn't let me Do My Thing... I'd treat myself to a bed inside and a store bought supper.

That set me up good though for gettin' up early the next morning. I'd figure a thing or two out, do that bit of posting I managed and hit the road with one good nights sleep under my belt.

Another small lesson I may have gained; I think me and mummy sleeping bags might have seen our last get together. ;) I haven't had a chance to check yet... but I think I may have grabbed the wrong bag. I seem to remember that mine is a touch roomier than hers...

It's either that or I've outgrown the claustrophobia inducing torture bags. Whichever it turns out to be... on this trip, I felt like I was tryin' to sleep in a sock!

Not a good thing to wake up in the middle of oh-damn-it's-dark and you can't move... It reminded me of that nightmare I had forty years ago where a giant spider had wrapped me up in it's web...

When I woke up and my arms were pinned to my sides and I couldn't move for a few seconds. I fear I... uh ... might have made some noise... the camp neighbors sure looked at me "oddly" come the dawn! ;)

That and I believe my old bones are gonna go lookin' hard at that luxury lite fold up cot I've had recommended to me...

On to makin' a decision after breakfast...

Brian, my friend, you are an absolute HOOT. You keep me in stitches laughing at your antics and the things that happen to you. Glad you enjoyed your trip, and as always, some beautiful country. Glad you are back home safe.
Sitting here giggling, posting a picture in my mind's eye of you stuck in the sleeping bag. All I can see is that big mustache hanging out over the rim. LOL