I Don't CARE if They ARE Pro-Feshunals... CHECK Their Work!

That, combined with a baaaaaad case of rapidly advancing Old Timers Syndrome contributed to a story that's... there's no other way to say it... The fable of the Invincibility of Experience.

Ha ha! Not so fast Grasshopper!

Some time ago, while still wintering in Arizona... nearly 9000 miles by Motorcycle Tire time, I had a pair of Fine Avon Cobra Tires installed. I thought; Take it to a pro shop and save myself the hassle of swapping the tires on my beast.

Well, I did that and... WhooooooWHeeee! They performed SO much better than the Metzler tires I'd been running.

But... as time wore on... an unusual thing was noticed... the front tire was wearing unusually fast. A Raider with its 113 cubic inches of Bad Attitude has a reputation for stripping the rubber off a BACK tire.

I've routinely gone through ONE back tire for every TWO up front.

On this pair that routine is being reversed... Weird. At right on 9000 miles on the tires, the back has several thousand more miles easily left in her... the front is already down into the Wear Bars. Crap.

So... I'm out looking at the wheel to make sure I have the tire size and model number wrote down right... 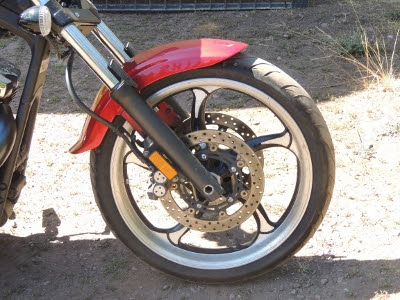 Look at the SPOKES on the front wheels... Of MY bike... and then the Factory Raider pic...

The things that come into play there are these;

1. The Tires Tread is designed by the engineers who do such things to shed water optimally. If you run the thing backwards... OPTIMAL performance is unlikely...

2. When they build tires... the TREAD, is initially in a long flat strip, which as I understand it is then applied to the carcass of the tire. Where the two ends are joined they cut those ends at an angle, rather than just a straight cut, to increase the bonding area of the splice. Now... they point that splice in a specific direction related to rotation so that on the back tire, the force of acceleration pushes the splice together rather than pulling it apart.

On the FRONT tire, they reverse that, so that under heavy braking (the front tire does as much as 85% of braking) the same thing happens. The splice is compressed together not pulled apart...

SO... the Rotational direction of a tire installation is a lil bit important...

I'm still uninformed of what affect it can have on tread wear itself. It seems reasonable to expect a rather increased rate of rubber going on vacation when it's running opposite to the design rotation.

So.. if you have a lil' bit of an inclination toward Old Timers Induced Observational Retardation of Important details... commonly referred to as being a DUMB ASS... Like a certain fella I have intimate knowledge of... I'd suggest taking a few extra minutes when you pick up your machine when somebody has worked on it... and double check that things are right and correct.

... or... when YOU have worked on it... and make for certain sure that the worker bee wasn't laboring under the burden of severe Cranial Inversion... otherwise known as suffering from the odoriferous affliction of placing ones Head in Rectal Defilade...

Now... I have some emails to write to Motorcycle Dealerships and Tire manufacturers to get myself educated a mite more...

Grab Your Handles and Ride
Brian
Posted by Brian at 1:03 PM

If you want something done right - you have to do it yourself!!

Bad that they installed it backwards and glad I am nothing bad happened because of it, but I am surprised no one said anything about the front wheel looking a little odd during all those miles.

ha ha... when you are lOOKING for nothing wrong that's what you find!

You have work done in a "Pro" shop and it's easy to forget that they're as human as "we" are and double checking their work is a good thing...

I suppose that's why they have checklists and double checks in operation rooms! :) if a DOCTOR can make a GOOF... I don't know why a mechanic can't.

The only thing that is a little bit depressing is the "Dealer" involved isn't currently showing signs of any interest in any "allowance" for the mistake that an AVON tire tech told me could sure result in accelerated wear as well as considerable safety issues...

The new tire is ordered in Montana... and will be put on in a few days... THIS TIME with the wheel/tire combo CAREFULLY checked LOL! and I'll decide if Naming the dealer shop in Arizona is the correct thing to do. I'd like to be able to say they stepped up. That would be awesome since everyone screws up. The difference is what do the ones who are made aware of their goofs, DO about it... I think possibly warning of shops that choose to NOT step up is maybe the right thing to do? I'm not yet sure...

Similar tire wear issue - front is toast yet rear is still fine after about 5,000 miles. Wheel and tire are both mounted correctly (I checked that first) but there's still something not right. More investigation required.

One thing my hubs and I have going for us is a proofreader. Now I'm sure you know the importance of having a proofreader in publishing; I've been one for literally millions of words over the years. That second set of eyes, that fresh view, often saves the whole job.

It's the little things the fresh eyes catch.

That's not to say we would have caught this. But perhaps. . .

He checks my bike so often, I think he knows it better than I do. I have a sharp ear that really hears the tiniest noise that isn't right. I can also see his bike in many ways he cannot.

Nothing like having a partner. Daily I'm reminded what a benefit it has been. :)

Seems to me like someone owes you a whole-lotta-flippin' money! I'm a great enforcer, in case you need some backup. I'm seriously itching to dish out a good bat beating.

I've had that happen to me before. Fonrtunately, I thought to check the tire before leaving the shop, and brought it to their attention. Now, I check that sort of thing every time. Sucks to hear you lost all that tread. Perhaps the shop will comp you a new tire?

Canajun; Unexpected tire wear, if the tire was ridden the same generally provokes some concern. I know that a few tire manufacturers have been found to be "inconsistent" in the performance of their tires, based on the source country ;-\ Avon, had the rep of quality/consistency... like you said, more investigation required...

Sash; So far, the "Dealer" that did the "Install" has chosen to NOT RESPOND. I'm at that point in life that I don't need to stain any more of MY life with lousy integrity than is absolutely required. I'll give them until after the Montana Dealer has installed the fresh tire... and It's been Triple checked for proper install... I'll give the dealer a second opportunity to respond and do what they think is proper...

Considering what the Avon Factory tech told me, the reverse install carries significant safety concerns. Luckily I managed to ride the tire for a considerable time without enduring the consequences of an unsafe condition.

The fact that I was fortunate to NOT have an improperly installed tire/wheel combo fail at road speed is irrelevant. The dealer created the situation, and others are therefore at risk from the dealers apparent refusal to even acknowledge the issue and demonstrate actions to prevent it from recurring in the future.

After the new tire goes on, I'll either edit the original post or more likely write an update post where that Dealer will be identified.

Either I'll be able to say they stepped up or I'll report they chose to ignore me. Either way, the whole story will get told and I'll let the public that reads it protect themselves as they see fit and vote with their customer Dollars.

Beyond that? The dealer gets to sleep in whichever bed they choose to make.