A Rideabout Along the River...

Well... sort of. The way I went you know the river's there, and I crossed it twice, but mostly you're just rolling through the desert.

I cut west from Quartzsite on I-10 to catch 78 south at Blythe and roll toward Ripley and Palo Verde. For a ranch kid, running through dry, desolate desert and breaking into irrigated farm ground with the scent of fresh cut hay on the morning of the last day of January is just... Fine.

Especially when back home they're doing another bout with Al's global warming "Polar Vortex". 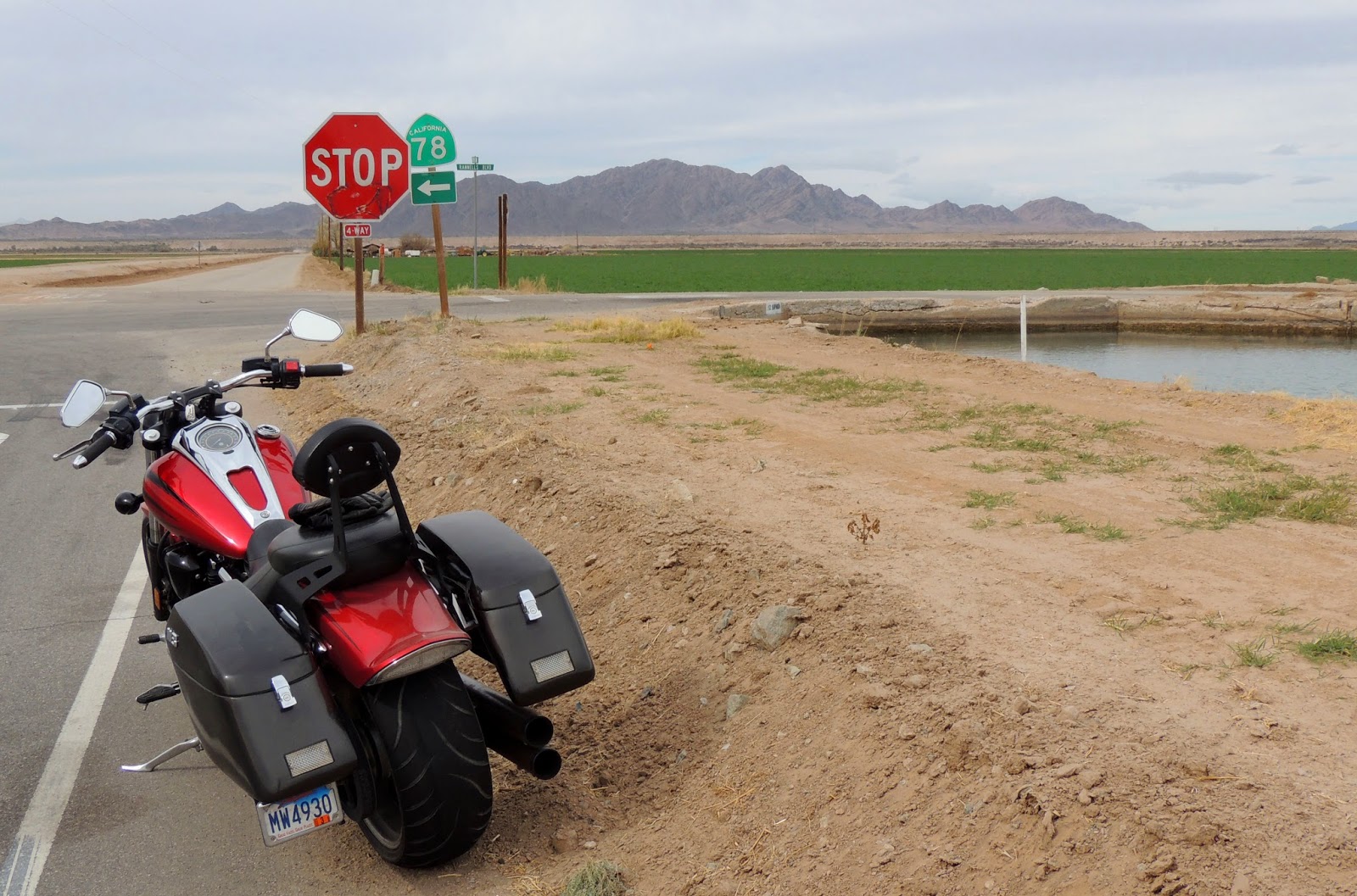 It's mostly straight runs. There's nothing through there to test your technical skills. But for me, just the same, it was an excellent morning.

Hay and crops growing on both sides of the asphalt.

Pleasant weather and the open road. I'll take it. 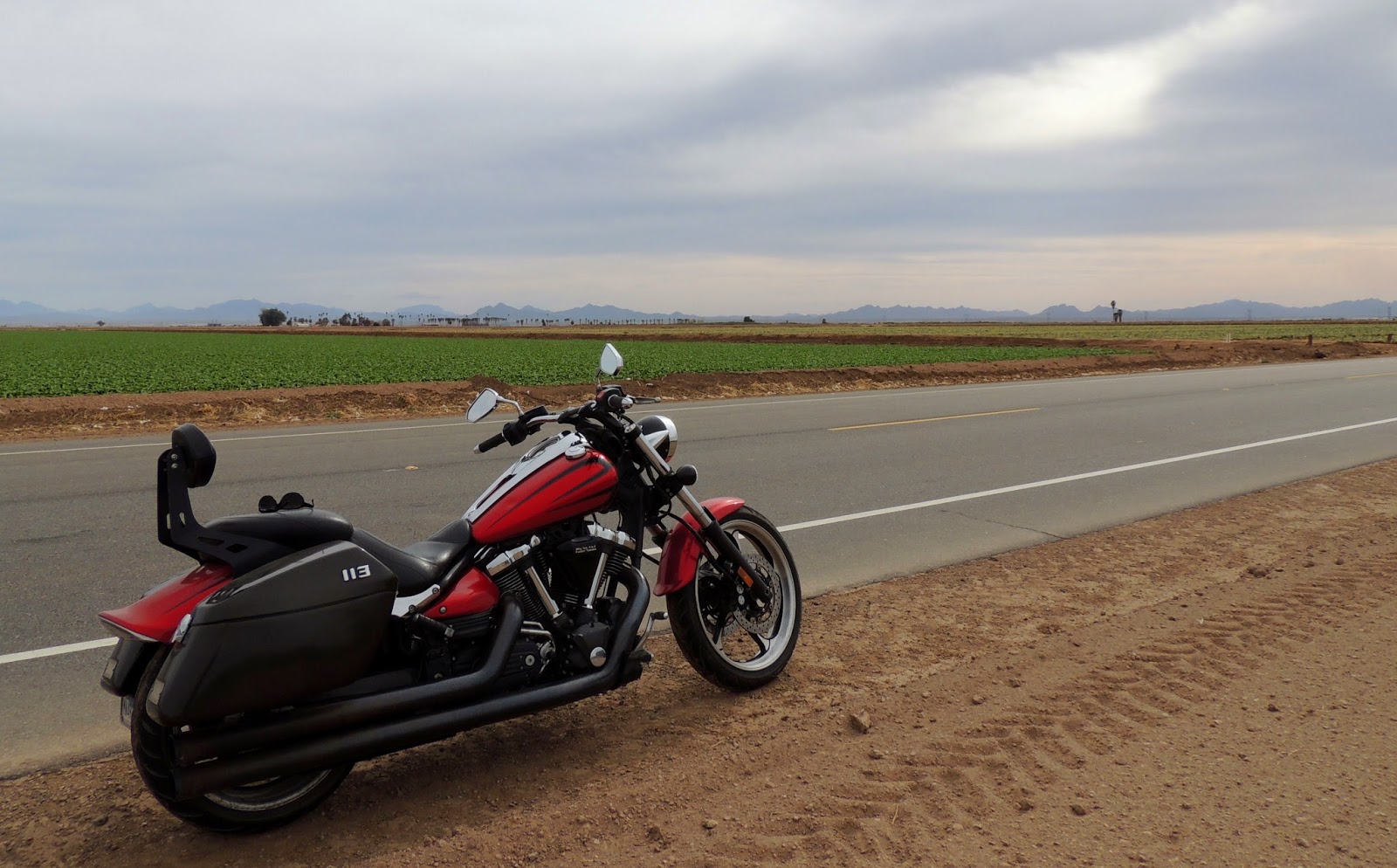 Ha! I'm running down the road and know I'm supposed to turn off again... somewhere...

A narrow looking road comes along... but my map is buried in my jacket... and there just up that bit of pavement a hundred feet sits a highway patrol...

Natural urges being what they are... I run on by because for some reason, my head tells me I don't want to turn there and rumble past that LEO... what a liar! ;)

Then along come Algodones Dunes... ATV's... and a huge yard of stored RV's... all sitting amidst a sea of sand... and look at the map or no... I'm pretty sure this ain't the way. 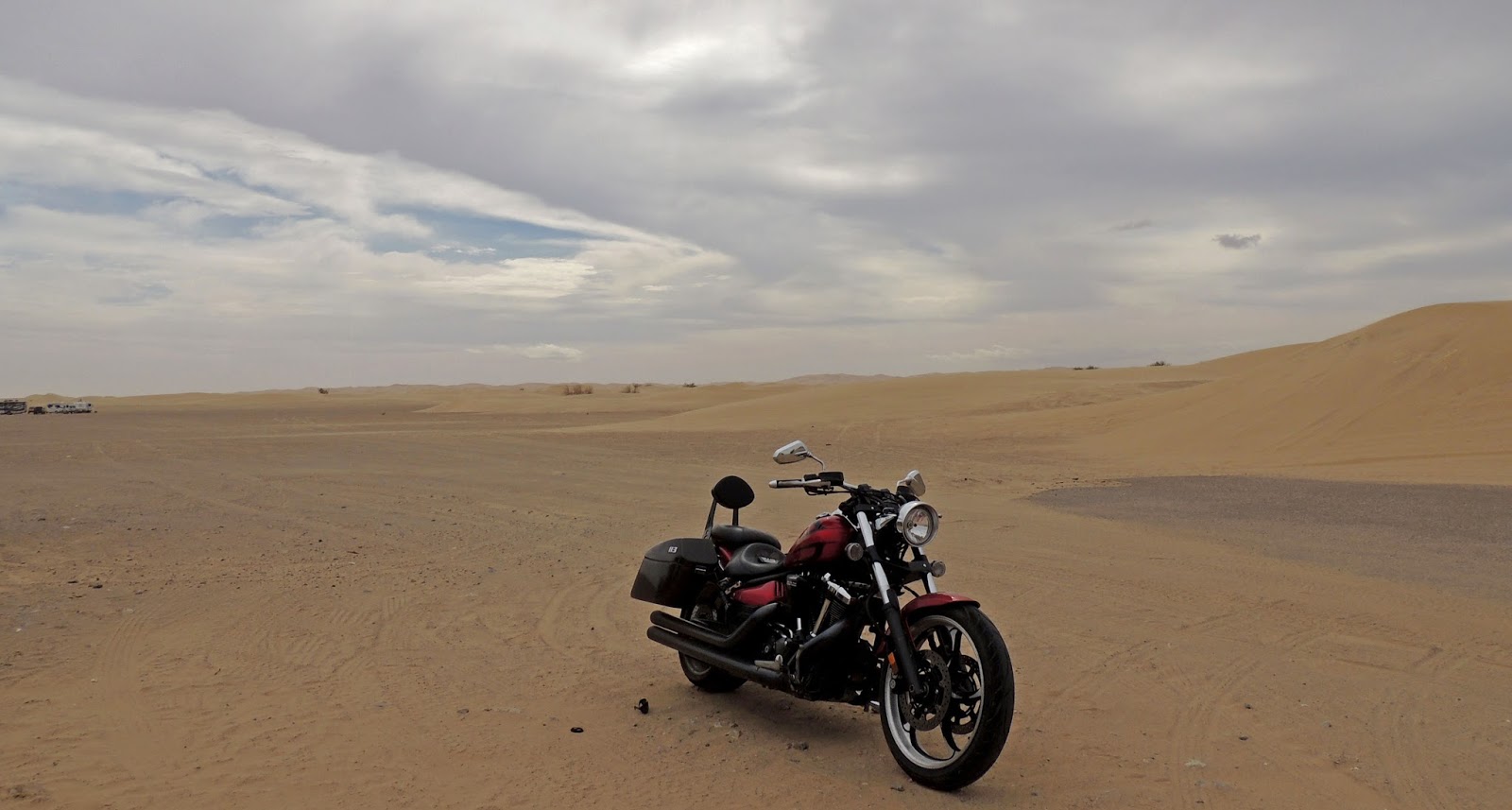 Yeah... cuz that little tickle from my brain and the Hwy Patrol kept me runnin' straight I went on down past Glamis... when I was supposed to lean over left and make the cut off onto S34...

So NOW I had to back track and turn down where I should have gone in the first place, only it's now maybe twenty miles farther. :) and since I was... um... pushing it a bit here and there... and my fuel consumption was down a bit... it was fun to watch Yuma and that lil' fuel gauge needle racing to see who'd get there first... Cuz there ain't no fuel out that-a-way.

Buuuuut I made it with miles to spare... and linked up with Steve and Tina of Road Pickle fame.

They rode in from San Diego while I was finding my way through the sand dunes... We linked up for a craft beer in a local pub and to sort out all the troubles of soh-sigh-uh-tee, relationships and all the evils of the world from the beginning of time to date!

Well... Tina and I did... Steve... he mostly hangs back... kinda quiet and watchful while Tina and Me cut and slashed and got it all sorted out! Ha ha... don't I wish!

But... all good times must come to an end... or they'd just be average. So, after five hours or so of excellent  beer and conversation, the road pickle crew climbed on their scooters... and the ribbon of asphalt guy pointed his nose north. They rode the couple miles to their lodging for the night...

... and I rode through the chilly Arizona desert... stopping at the border patrol check station so their drug dog could make sure I'd no midgets without documents concealed in my saddle bags... and then finished that 90 mile run some time after midnight in the cold desert back north of Quartzsite.

One day. Two Friends and 250 miles on a ribbon of asphalt. A good day.

Enjoyed hanging out with you over a few beers, even if I'm doing a lot of listening.

I had a SASHtastic time meeting you Brian! You're so much fun to hash things out with, I must say.

Steve was unusually quiet, but I think that's because you and I were unusually talkative and of course, quite entertaining.

GO ahead... you can tell the truth... If ~I'm~ talking... you have to be fairly ambitious to get a word in edgewise... and THEN it's still gotta be a really skinny one ;)

Was an excellent evening along that Ribbon of Highway :)

A great excuse for a ride, meeting up with other like minded folks.

I like the pic of the bike surrounded by sand, paints quite a picture of the scenery.

It sounds like our Saturday morning coffee meet ups. Solve all the worlds problems. Not really, but we'd like to think so.

I had to dig out my map to see where you went. Looks like lots of desert out there.

It's great to meet other bloggers and talk the night away, or at least talk all night with Tina