I've Been Reworking Some of My Touring Gear

I picked up a New Ultra Touring Bag from Kuryakyn about a week ago. Found it in the Beaver's Den Motorcycle Leather shop on a ride up Highway 34 west of Loveland...


There's been a bit of evolution over the years... for how I pack my gear.

I used to carry the tent up on the bars. Not a bad way... but there was some interference with the ignition key... so I'm trying out some new packing of that.

Also, I abandoned my old mummy bag. I just can't tolerate the confines of that thing... and I'm now carrying a cheapie walmart rectangular bag that seems to keep me as warm and a hell of a lot more spacious. But it is a bit more bulky.

The Kuryakyn tour bag so far is proving out well. I took it on a "Test ride" up a twisting mountain canyon and into Rocky Mountain National park the other day. I thought it a good idea to test it and the way I've got everything packed now on a real world hundred mile ride... before I take off on a weeklong trip hopefully later this week... and it all rode without a hitch.

The bag is something I'm becoming real happy with. It carries actually more clothes than I took to Alaska... and does it without having to stuff and punch to get it in. The quality of the bag seems top notch... 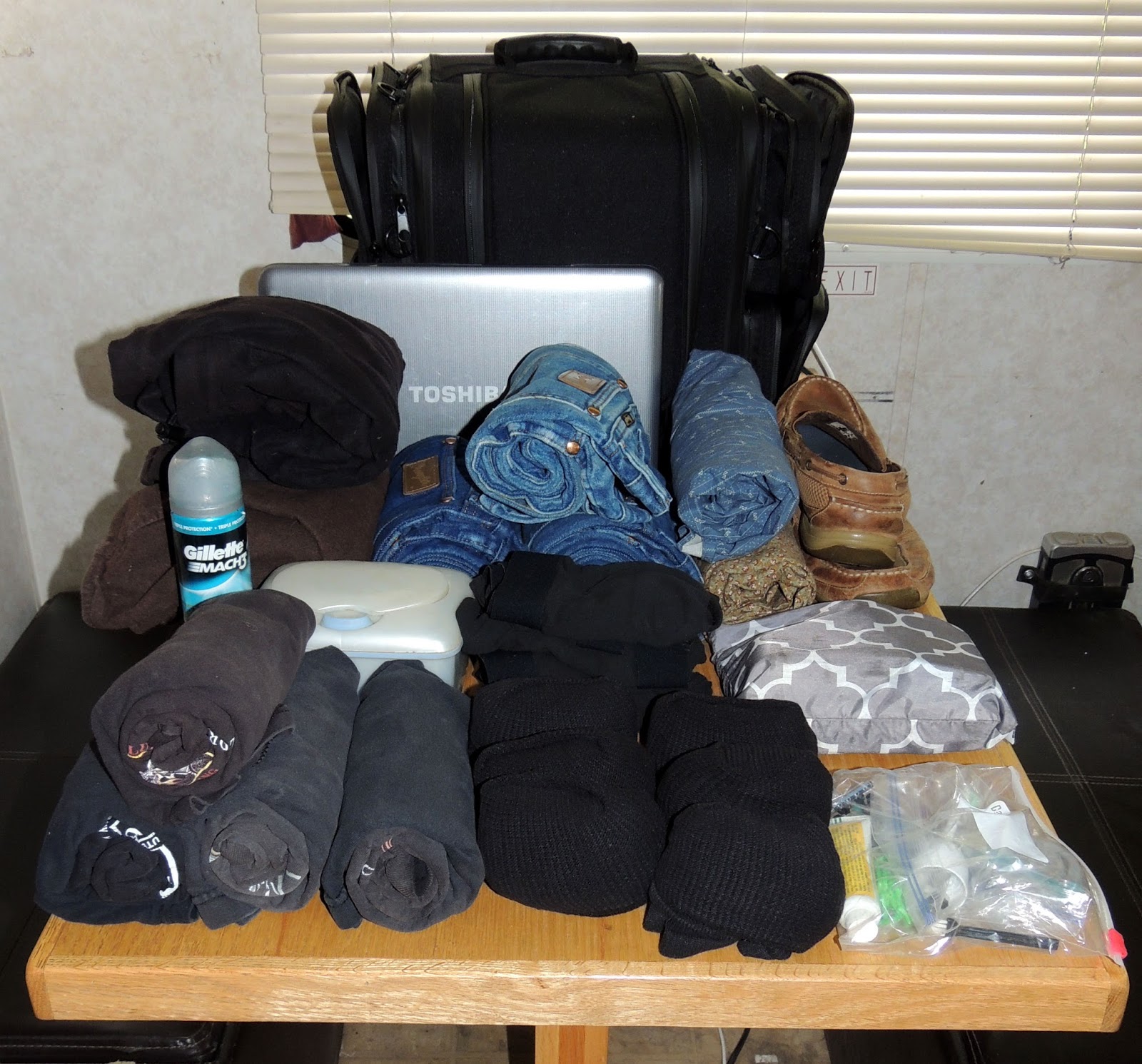 This is what I put in it... and still have a bit of space if I DID feel like stuffing... Likely I don't need that much... you just stop at a laundry a bit more often. :)

... and this pic doesn't include the drinking water bladder I'm testing out in the top road side pocket... a convenient place for drinking water on the road (one of the bigger mistakes people make on long hot tours... they fail to drink enough water) Make it convenient to get a drink... It should improve that... which makes you a safer rider. (dehydration is going to slow down your thinking/reaction time)

Likely one of the biggest improvements for me is that it attaches rock solid. I've tried to cheap out for a while, (not a good choice really) using "other" gear and not bags designed explicitly for bikes. That left me always having to conjure up ways of strapping it on secure.

This bag locks onto my seat with two built in straps from the bottom front and a wide, velcro strap that wraps around the back rest.

Combined with two straps from D-rings on top of the tour bag that I use as anchor points to secure the tent...which is also secured to the sleeping bag below it... which is secured to the luggage rack... it is a rock solid load.

It does come with a heavy duty rain cover... but with all my other gear, that doesn't look like it's going to fit. The bag itself seems like it should be pretty water resistant... but I'm scouting for a rain cover that will cover the whole load... thinking maybe a light nylon tarp sized right and a lil' bigger net to secure it... always some sort of gear to fiddle with...

Grab Your Handles and Ride
Brian
Posted by Brian at 10:23 AM

Good thing you have (had) a low center of gravity on the bike.

The new bag looks pretty nice and looks like it will last.

I'm somewhere between the guys that carry nothin' but a clean t shirt and a bedroll... and those that have coolers and ... huge friggin' trailers! :-D

I've carried in duffles... they keep things lower... but they're so wide they interfere with getting into saddlebags if needs be...

Brian ... as I was packing new luggage this year a friend said to me, "You'd think you'd have this all down pat by now!" NO ... new luggage is like starting all over again. I think this year over a 20 day ride I repacked the new stuff three times before I was happy(this time.)
I also love the sound of the rain on 'nylon' as long as I'm not in a hurry.