We've been rolling south through California for a couple weeks now...

I'll say it right up front, I love that coastal country... and I truly want to run the Raider down Hwy 101 someday... a long way down it... or up for that matter...

How-some-ever... I do not believe, I could ever live there. That weather would beat me down in short order. Guess I just need more sun than we saw over there...

Now... for a Biker... this more "Inland" country is a freaking "Bikers Heaven!" I gotta tell anyone rolling two wheel anywhere else in the country... these fellas in California... are more lucky than any one person should have the right to be! 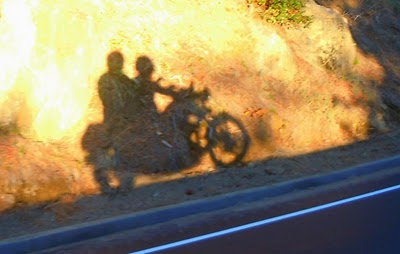 I've rolled over more awesome freakin' Motorcycle roads in the last couple weeks of bein' in California than I've maybe covered in the last two years!

... and those roads are maybe a half of a 1/4% of the likely prospects here in the Great Bear State...

I swear... it's like the California Road Engineers, laid out their roads, explicitly for big two wheelers!... To test a rider and his machine... or just let him cruise along with a huge stupid grin on his face...

Is that possible? a whole dang state road system... built for the explicit purpose of maximizing the miles of Great Motorcycle Roads? :o) ... OK... but it is a nice fantasy... ain't it? :o)

If it weren't for the fact that I exist at pretty much the opposite, political, extreme... of what folks out here are known for... and that costs seem to be, whoooooeeee! several notches higher than what I'm used to... California would be Bikers Heaven! :o)

Maybe, like I said before... ANY... road you're riding... is the best one for That day... but... this Sunny (as long as you're inland!) California... seems to have more than its' fair share of especially Sweet Motorcycle roads for a fella needing to roll two wheels.

Share your stories and opinions;
*Tell us Which you think is the... The Best Touring Motorcycle
*Share...  Your Personal Motorcycle Philosophy with us!
*Tell us about your...  Great Motorcycle Roads
Posted by Brian at 10:14 AM