Moving Camp to One Made for Sweet Road Bike Riding!

Camping too many miles up a 4x4 road you talk yourself out of riding too much.

But, I only had to move in the vicinity of 30 miles to find a camp at Dumont Lake on top of Rabbit Ears Pass from which there's a nice selection of rides a guy can make.


Not to mention, camping my rig at 9500 feet or so in the middle of the summer has its own benefits too. Like, I run the furnace for an hour or so in the morning to take the chill off when I get up at sunrise; rather
than having to run a generator all day to power the air conditioner so I don't cook! :)

I made a small circle today of only 115 miles or so. It makes for a pretty nice run. I dropped east off of the pass from our camp along U.S. 40. It's 30 miles or so from here to Kremmling.

The run south down off the the continental divide is a nice roll through mostly open country with enough far views and sweeping bends to keep a guy smiling.

Kremmling made a good place to fill the top half of the fuel tank before I backtracked a touch over six miles to catch hwy 134 running west. The road climbs up out of the valley to cross Gore Pass... sorry, no relation...

The Gore it was named for was an Irish Count that came on a hunting trip to Colorado in the late 1800's. Got the Gore Range named after him and a few other pieces of geography... but his fame ain't made me a nickle! :)

Far as I'm aware... I got no royalty blood... or at least the nobleman didn't admit to playin' around with a commoner woman down in the ville! :)

The climb gets up into Aspen and fir pretty quick... and will bless you with some genuine rectal puckers if you ain't payin' attention.

The highway department has tarred quite a few cracks in the pavement in that section of road... 'tween the junction with U.S. 40 and hwy 131 at Toponas.

Now I'm sure you know that if those bits of tar are running across the pavement it's not so bad... but when they run along with it, and you'll find that juuuuust a few of those tarred cracks run parralel to your direction of travel... they can make things get a lil' interesting.

...When you come scrapin' the pegs around a twistie here and there, gawkin' off at the scenery and 'thout payin' close enough attention to the road; so you're not adjusting your position in the lane to miss the tar... and you catch one of those long bits of sun warmed tar... Whooooeee!

Wakes a daydreamer right up! And he starts makin' the proper adjustments so his "anatomy" can relax. :) All he's gotta do now is have one of his ridin' buddies give the seat a good hard yank at the next coffee break... it'll usually pull back out with a tug or two! :) 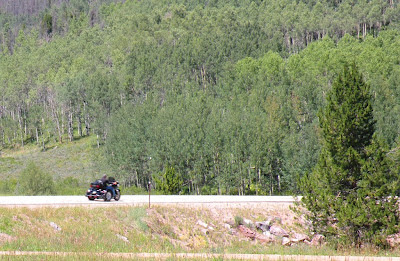 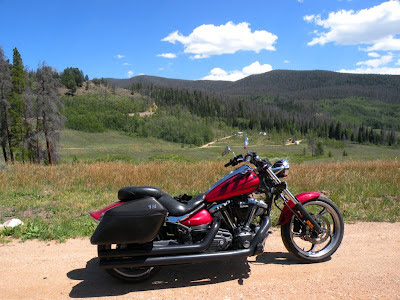 It's a popular route. Might could be there's as many bikes on it in the summer as cages.

When I turned north onto hwy 131 at Toponas the road opens up a bit through a long open valley. For those rare few who find such things pleasurable... and pay close attention... you can split the wind a lil' through there! ;)


I pulled into the Kum and Go in Yampa to take a short break and enjoy a sit in the sun with a cup of coffee. Had a conversation with a couple of van loads of Boy Scouts and their Leaders. They were rolling out of Piedmont, Missouri and headed for a back packing trip over in the Flat Tops.

Had to start the scooter up for the boys. What can I say, it's the easiest way to answer a young fella when he asks; "Is it loud?" ;) The fact that the kids were all droolin' over my Raider didn't hurt my ego none.

Got back on the bike and continued on north toward Oak Creek. There's a nice section of twisties there for a couple miles as you leave town... 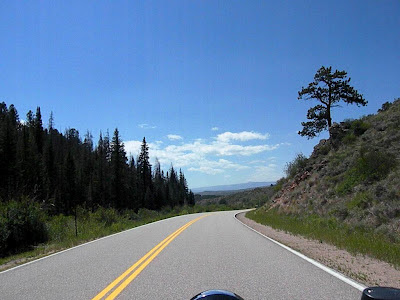 I managed to get caught behind a van for part of it. When you time it right it's a fun ride just sweeping from one leaner and pretty much back over into the next for a little while. Kind of like a lot of roads... A good road followed by short sections of GREAT road! :)

Made the turn back on to U.S. 40 at Steamboat Springs to climb back up to Rabbit Ears. That was another good section with traffic that was light enough and stayed out of the way so I could come pretty near to scrapin' a peg here and there... right up until I ran up on the Colorado State Trooper hidin' in the trees around a bend. :)

Like... I'm SURE he didn't hear those pipes of mine rumbling as I decelerated to stay behind the car I was juuuuuust 'bout to roll past. LOL! 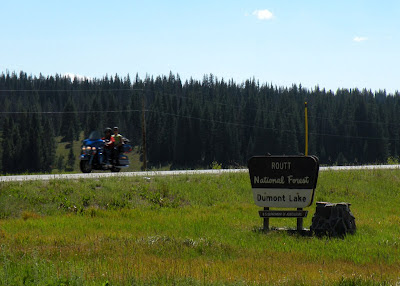 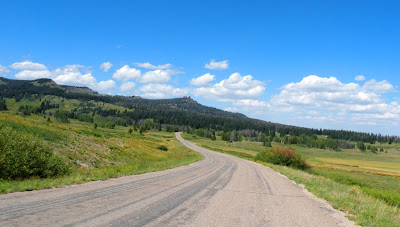 Nice view of the Rabbit Ears as I rolled back up the access road. 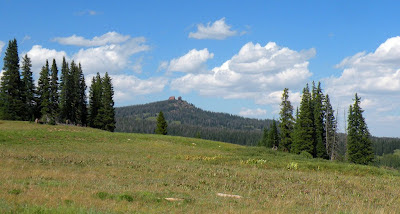 I've got the best life now. I may be poor and living hand to mouth, but I get to do that living all over the west. I get to ride through some of the most gorgeous country there is... and knowing...that THIS... is MY life! 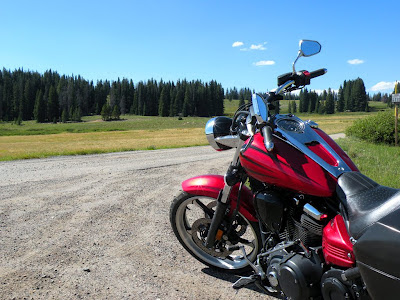