Getting the Last Good Out of a Motorcycle Helmet

I replaced my Nolan N103 Helmet a few weeks ago. It should have had another year or two before needing to be replaced, for safety reasons from the shell age... but the mechanisms in it to operate the the visors and the modular face shield were coming to operate so poorly I was fed up with it.

I opted this time for a cheaper but better fitting HJC CL16, Standard full face. 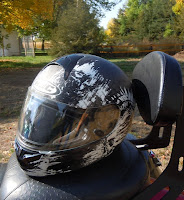 The only problem with this new helmet was that it doesn't have the slick and still operating well, chin strap quick release that's built into the Nolan Helmets.

I picked up a variety of quick release when I bought the HJC... 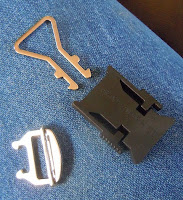 It laces onto the existing helmet chin straps... but for me it operates kind of clumsy/awkward.

Once you have it laced in and adjusted up right... You have to have the prongs aimed just right for it to fit into the slot...

Which for a lot of riders might NOT be an issue... 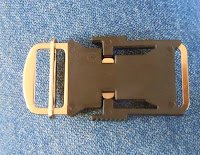 For me it has proven to be. Funbling around with something under my chin, that I can't see, is apparently... NOT... a skill of mine.

I got the dang thing wedged wrong a couple of times... and had a hell of a time getting it loose so I could take the helmet off. :)

Sooooo.... since that Old Nolan was still cluttering up the floor of the rig (I hadn't used it as dumpster filler yet) I had the bright Idea of scavenging it's Nolan quick release and splicing it onto my HJC Helmet!

Only took a couple minutes spinning a grinding stone in my Dewalt cordless to wear off the rivets and yank the whole strap system out of the Nolan N103. 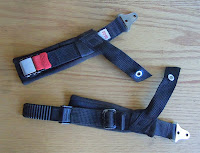 It turns out... I could have just cut the hardware loose for the most part.

After I cut a couple of bits loose from the straps on the HJC helmet and one piece of the Nolan's strapping, to let me lace in the hardware I was in business. 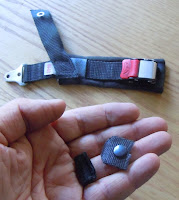 The male piece just laced right onto the Longer of the HJC straps. Snugged up tight it was right where it needed to be.

On the other side... the female piece, is right up against the D-rings. It adjusts up snug enough but there's nothing left if I get any scrawnyer! 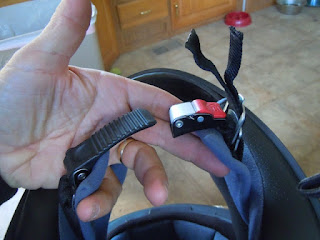 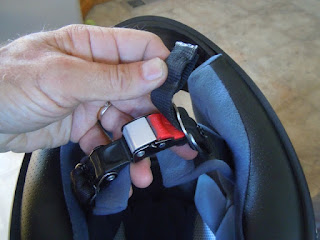 I can still work the red release lever to pull it when I'm taking it off.

If I gain the ambition I may just remove the D-rings and rivet the strap holding the Female end of the Helmet Strap quick release to the HJC factory strap. That would allow me to bump it over a lil' bit and gain a little more adjustment flexibility in the system... but for now, being lazy... I'll just use it as it is, since it is secure and works!

You just push the male end in slick and easy. A lot smoother system. Was I HJC I think I'd try to license the use of Nolan's Motorcycle helmet quick release! :)

As for the strength of the rivets I'd use? ... Having run my own custom leather and tack repair shop for ten years or so... The helmet would rip my head off before four or so of those rivets would break! So on that account I'm not concerned at all.

I've often though of getting a click system for my Scorpion helmet but I've been too lazy to do much research.

how did those new pipes work out Brian? i went back to my stock pipes because of the noise...... is sooo quiet now, so let me know how u like them , say hi to the wife for me

Yeah Bob; I wish Nolan would market their strap latch by itself! :) as it is I can make it work on my new helmet.

Kerry; I like 'em! The factory pipes were so quiet I couldn't hear anything... these Hard Chrome 3" Big Straights, I can hear at road speed... but they aren't so loud as to be objectionable. I don't think. But then I wear ear plugs and I'm half deaf :) They do have another set of baffles that would tone it down juuuust a bit if I wanted... but I'm likin' the rumble I got now... and I've seen no negative impact on fuel economy or performance. I think I may have lost a tiny bit of very low end pull... but I've picked up quite a lil' bit on the top end... which is maybe only fifty miles over the limit :))