Bikes along the Road...

This one I spotted when we pulled into the Wildflower Bread Company cafe in Sedona the other day.

I've only ever seen these Boss Hoss bikes in photographs. Never on the road. They've always made me wonder how they handled. 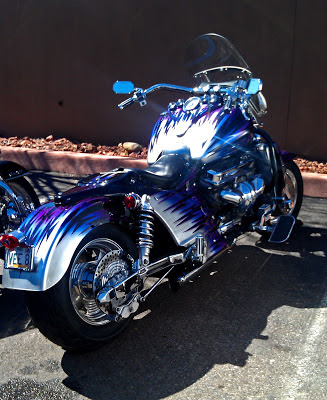 Think about it for a second... A V-Twin... and most all motorcycle motors... the rotaion of the engine is pretty much inline with the bike...

Years ago I'd built a hot rod chevy pickup. The 350 V8 motor in that thing was close to 400 HP. If I blipped the throttle on that truck, the whole rig rocked. SO... I always thought with these Boss Hoss motorcycles... blip the throttle and the scooter's likely to throw itself on the ground! :) 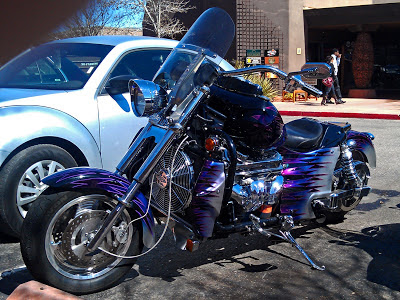 As luck would have it, I managed to find us a table right beside the guy... who appeared to be about my age an' not much bigger... who was ridin' this Beast of a Motorcycle.

He told me that he'd had an old BMW bike with that opposed motor that torqued the bike more than this big American Iron brute. The fella swore it wasn't much and he didn't even notice it... 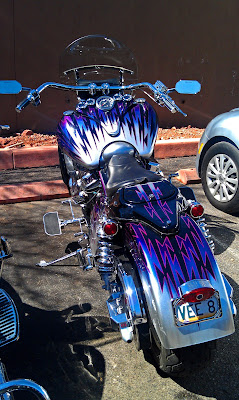 Grab Your Handles and Ride
Brian
Posted by Brian at 10:12 AM

You think your arms would get tired from muscling that bike around and it would be a beast to handle at low speeds. At least he is enjoying it.

Not one I'd ride but pretty to look at.