Is It a Bad Day or a Good Day?

The ride I made through Jerome the other day was just that... right on through it going and coming. I decided that was shortin' the town a good bit. So I thought we should make another short trip and stop this time.

You know, with a reputed 158 curves in 12 miles the Mingus Mtn road above Jerome is right up there in the class of the Coronado Trail over south of Alpine... and the 11 miles of The Dragon back east for technical riding...

Though, at 119 miles I'd have to give the edge to Arizona's Coronado Trail... and I bet those boys back east aren't dodging Elk along with the cagers and sports bike boys pushing to reach eternity juuuuust a mite quicker!

We walked about and took in the town one more time. Since we both grew up in Arizona it's kind of fun to see the changes over the years... I remember back in the '60's when Jerome was just a bunch of hippies and desert rats living in crumbling old buildings trying to slide off the mountain...

If you want to ride up and stay right there... you might just call ahead and book a stay in the Jerome Grand Hotel.


The building started nearly a hundred years ago as the finest hospital in Arizona... I heard a guy say the other day that; The Jerome Grand Hotel allows travelers to rent a "Hospital room for less than $5000 bucks a day!"  :)

When you get hungry... it looked like the Jerome Palace just down the hill had a booming business... I know walking past it sure smelled good... I was just unwilling to wait a half hour standing in the sun for lunch! Ya'll might have better luck. :) There's a hell of a lot of options up there. 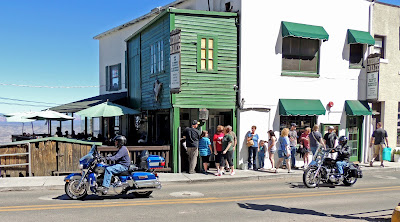 Jerome is a fairly Motorcycle friendly town... if you take them setting up a Motorcycle Parking Only lot to mean anything...


I was standing across the street waiting on the back seat who was checking out the offerings in one of the shops... and these two riders stopped in front of me and set to inspecting some sort of difficulty with the bike that apparently belongs to the rider squatted beside it...

They were Vets/Legion riders and apparently buddies.


Bein' the nosy sort I kinda overheard some of their conversation... The fella standing behind was saying something like; "Yeah, that's why I had you climb back on and sit on it for a bit... Some guys can never get back on if they wait too long!"

From what I could gather stickin' my nose in other peoples business ;) It seemed that somewhere riding up, the guy squattin' down must have dropped it. If you look real close at the windshield you can see the scratches they checked out later... They were looking hard at his right side footboard that sure didn't wanna work right, along with a few other bits. It looked like the highway bar was pushed back into the pedals...

The thing is this; The scooter was still rideable and rolling. I looked the rider over as he moved around; He bore no wounds, no limps and no tears... So, considering the bike went down... and he rode her home...

What would you call it? I'd call that a Pretty Good Day! :) 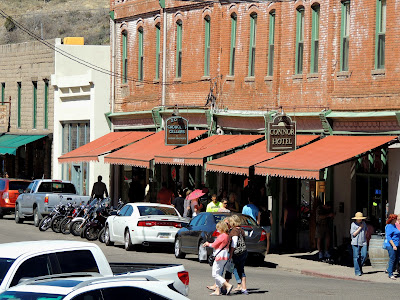 Ride on up. Catch a room at the Hotel or roll on over the top of Mingus Mtn and grin on over to Prescott to find a room... You can spend your evening there on Whisker Row! :) Just use a lil' sense sippin' a cool one in Jerome if you're gonna ride the mountain!

Now... a lil' side bar story; I was photographin' the corner of a building... tryin' to do that arts fartsy architectural photo stuff... you know... trying to cultivate some culture! ;) and this couple walked by me... 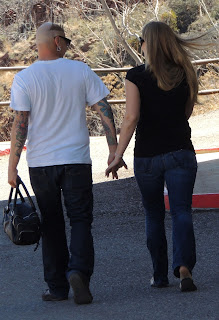 The guy glanced at me as they strolled by then looked up at where I was pointing my camera... shrugged looked over at his girlfriend and said something...

...Looked back up at what I was shooting and then after another shrug said something else to her... to which they both had a pretty fair giggle... OK... Fine... I don't mind giving folks a nice laugh... adds to my self worth! :)


Ya'll are gonna laugh at what I'm trying to take a picture of ???

I won't post up any more pics of Jerome for now... gotta leave some of  the town for you to discover on your own!

Jerome is a cool little town ain't it? I love the bars there, I love the history, and I love riding the roads there.

Not good that a rider went down but at least he seemed to fare well.

What had me chuckling was the dude's hair in the last pic and them laughing at what you were taking picture of. I don't think he rides - couldn't get a helmet on with that coiffure.