I had a couple of goals in mind while running north under the Montana sky. The first was to find a fresh camp for the next week or so.

The second was to test a theory.

The last few months it seemed to me that most of the time my fuel mileage was down quite a bit. While I'd grown accustomed to routinely breaking 50 mpg with the big cruiser, lately that number's been down 'round 45 a lot more. Hell, we generally still get 48 on the two up runs.

So, I was wondering if "something" on my gal was off a bit. Sonja seems to rumble the same tune she always has...but lately, it's like she's a bit thirstier.

I've Cogitated on the problem while lubricating my cogitator with a number of various brands of fine locally brewed lubricants... such as my latest find... 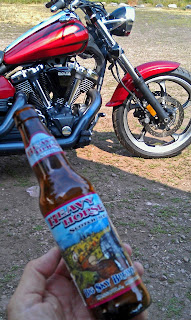 So... not only are Montanans  blessed with their Big Sky, ... They've got a brewery that builds a damn fine ale to wind down with after a day on the saddle.

It might not be fair for one state to have so much!

Anyhoo... with Sonja whispering; The problem is not me! and the road that runs past our camp calling to come and play...

... I managed to devise a test. You see, I got to wondering if maybe... poooooosibly... I might have gotten a lil' heavy handed with my Girl here lately...

So I came up with this idea;

I'll ride to Hungry Horse and back... find a camp... and test Sonja's claim that the Problem didn't reside in her. I'll ride her steady and even and Cruise up that two lane between 60 and 65.

Well, on a bright and sunny Saturday morn I fired her up and we headed north, drinking the wind. 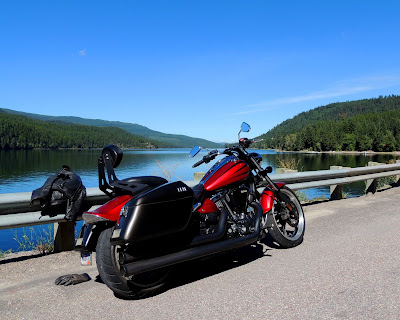 It got a lil' chilly, sunny as it was, in the vicinity of Swan lake so I pulled in for a minute to add my fleece under my jacket. Then it was hang on to that cruiser and follow the paint stripes to Hungry Horse.

Have you any idea how difficult it is to maintain 63 mph... in Montana? Especially when you got bozo minivan drivers who see no reason to pull across the center line when passing you until they're something less than fifteen feet behind you? arrrrggggghhhhh....

...and then... they see no worldly reason to actually go clean over into the other lane to make the pass? Like it will save tire rubber or something if they only go far enough to put two wheels across the line? ... and after all; "you ARE on a motorcycle! You can just move over and let me have half your lane! There's plenty of room! Stop being so hoggish!"

I have found a fairly effective method to coax them to actually put their entire car on the other side of the paint stripe as they pass though... this trip... a left foot raised as high as I could lift it, attached to a cocked knee... was apparently perceived as an intention to leave a size 9 boot print on an otherwise unblemished passenger door.

Their vee-hickle suddenly moved 36 inches in an away-from-me motion allowing my knee to uncock and the smile to return to my shaking head. Wanting to maintain civility and good humor I waved my forgiveness at the apparently lane dyslexia afflicted operator with the universal symbol of friendship and understanding... The Bird.

Without further excitement other than the sweeping road under that always Big Sky I made the turns from 83 onto 35 at Big Fork and then off of 35 onto 206 toward Columbia Falls. Caught Hwy 2 and turned east for the short run of maybe five miles to the access road that turns south to Hungry Horse Dam.

And it's a damn Fine Dam! 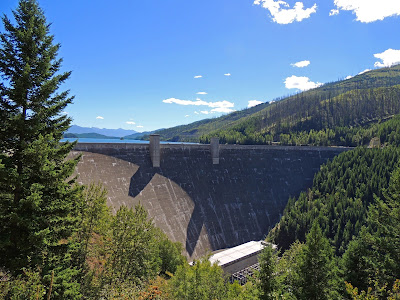 But beavers build those too, and my interest lay beyond... I was hunting my first goal... another camp so I kept rolling.

It turns out that my luck was running. Though the camps along that right bank you can see behind the dam are managed by private corporations... because... you know... the Forest Service... unlike the BLM is too busy not cutting timber to manage it's campgrounds... ;) ...

... They apparently don't lock these up at the end of the season. The folks at the visitor center on the damn assured me they're left open well into the fall.

So... I followed along the nicely twisting road (but mind your manners, there's gravel and deadfall trash on a lot of the bends in it) to check out three of 'em... 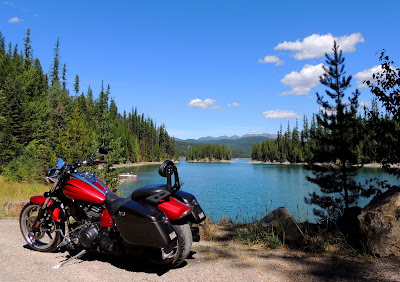 Sweet! Goal Number one is ticked off the list. Now, roll back into the lil' burg of Hungry Horse... choke down an A&W Burger and a big mug of Root Beer... and fuel up to check the stats on that Big Sky Brewing Co. lubricated Theory.

Sonja was whispering the truth.

And... with that quandary put to rest... I could roll home a lot quicker than I left it behind. Yeah... we drank a good bit more wind going south than going north... and gaz-oh-lean! ;)

Yes sir... run her steady and even 'tween 60 and 65 and she sips at the fuel pump. But twist her up tighter... sail along in that country north of 80 a lot and she'll get thirstier. Still a respectable 45 or so... but it falls off when you get north of 65-70 a lot... and especially if you do that gettin' with a pretty athletic twist of that right hand.

Finished a sweet day at 223 miles and knowing Sonja was healthy... She just works up a thirst if she's workin' harder. What a surprise huh?

What a great day even if you had to behave on the throttle and deal with asshat minivan drivers.

Do you think elevation might also have anything to do with fuel consumption?

I was thinking the same thing about elevation. I've noticed so many little baby changes along the route with Katie Scarlet and now Gracie. Elevation, temps, and speed eat at my ATM card. . .

I love the idea of threatening the passing motorists with my boot. I'll be doing that going forward. I'm really a bitch on the road. If someone gets a hair too close to my hubs, I usually run them down and throw a few fists, begging them to pull over so I can beat them senseless. Punishing temper still. I'm working on it.
Smooches,
Sash
www.Sashmouth.com