I keep making progress on the bike... in between the wind storms. I can honestly say I don't care much for such work in the jaws of a Rocky Mountain Wind... and the folks that sited this garage, being farm folk; that's the sort that spend their lives... living on the land... I have to say WTF?

... You Should know better! You don't site your doors facing the prevailing wind! I don't care if you ARE behind a windbreak... it's just dumb... Man... You open that door and those gusts come a whooshin' in and send stuff flying everywhere...

Yeah sure, there's lights inside and I COULD close the door... Lil' 60 watt bulbs ten feet in the air and spaced about fifteen feet apart. It's like trying to light up a stadium with a bic lighter. ;) 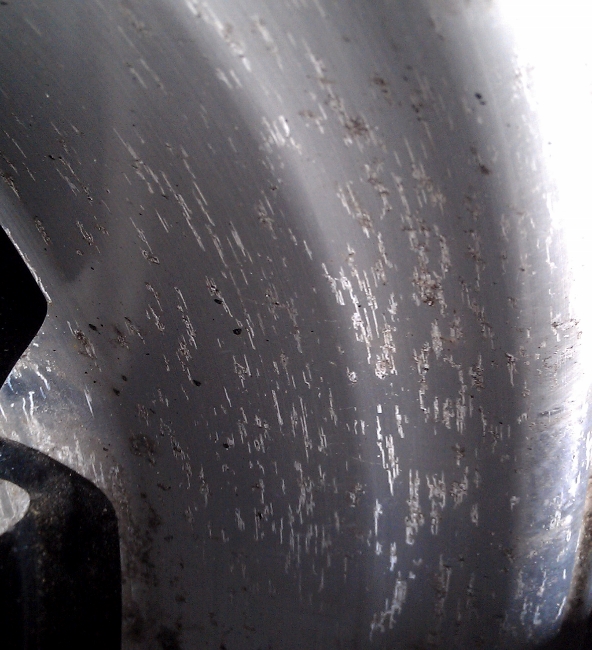 So anyway... I got to polishing on those Yamaha wheels.. Honestly, I thought I was pretty screwed...

They appeared to have gone through some sort of a warzone... and I never saw it... just saw the wheels after. No idea of where it happened.

They looked like gravel just got in there and rolled around for a few miles... 'cept... I was never in any when they got dinged up.

Figured it would take damn near grinding to bring 'em back to anything respectable...

Lucky for me, it was one more time I've been found to be wrong... As it turns out, Yamaha has 'em coated with some variety of clear coat.

I don't know what did the damage but the damage is only to that clear coat. 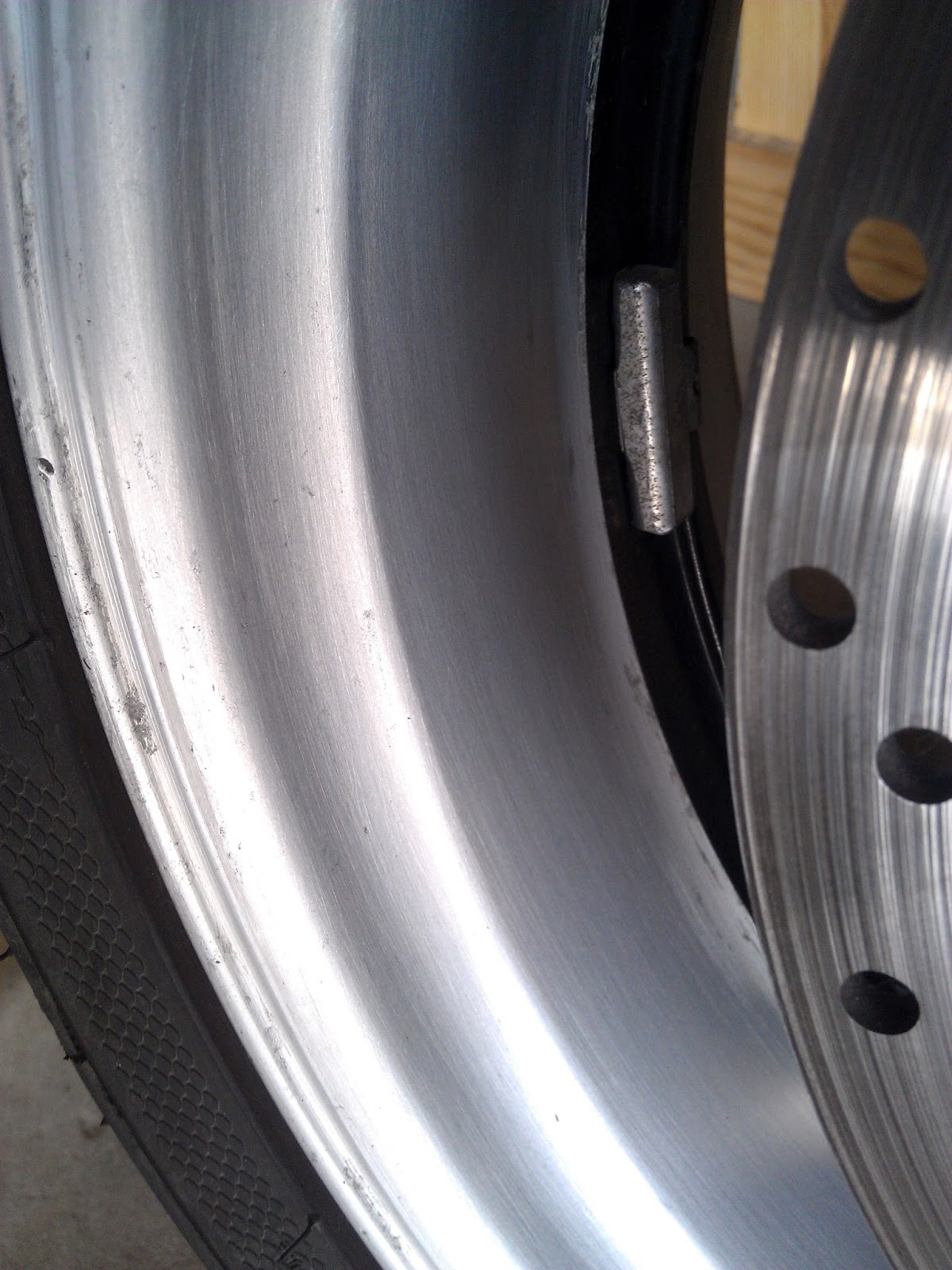 I found that wet sanding with a fine sponge sanding pad takes that finish off and leaves a nice clean undamaged wheel behind...

It's not an especially quick process... I suppose it might be if I used a coarser sponge sanding pad? buuuuuut... My thinking is I can do a lot of damage a lot slower... with the fine pad. ;)

That allows me more time to catch my self doing something wrong so I can... STOP!

Got back to work on the saddlebags today... wind or no wind... and no wind could only be called a wish... When I made a run for a bit more sandpaper and some dust masks... it was pushing that truck around...which weighing maybe 8500 or so, takes some doing!

But... I got the "Bad" lid stripped down to and through the Gel Coat where needed... 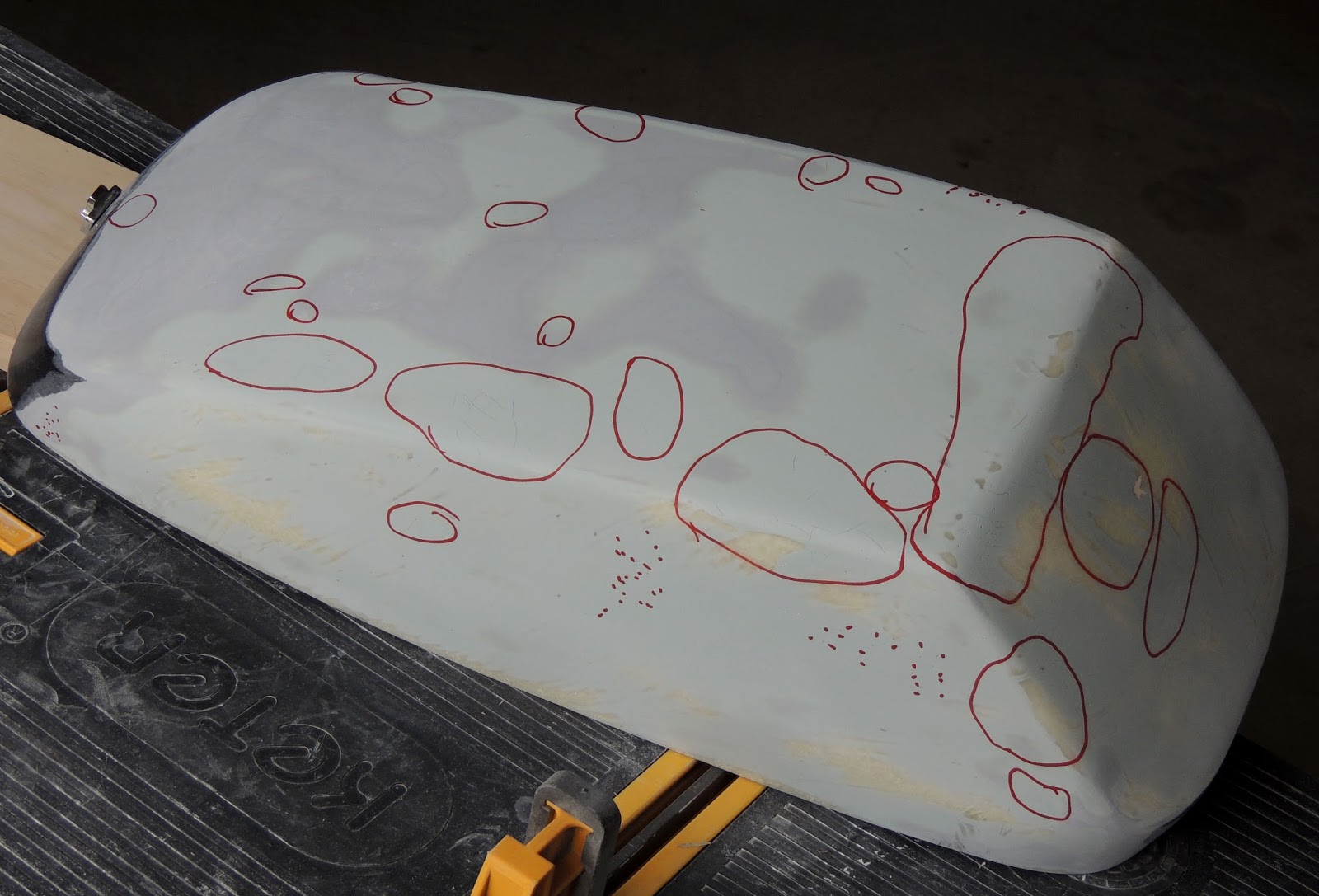 The more finish I took off the more cracks were revealed... as well as significant areas of pinholes.

The circled areas are where the cracks are... the "dotted" areas are some of the pinholed areas revealed when I started sanding the primer layer. 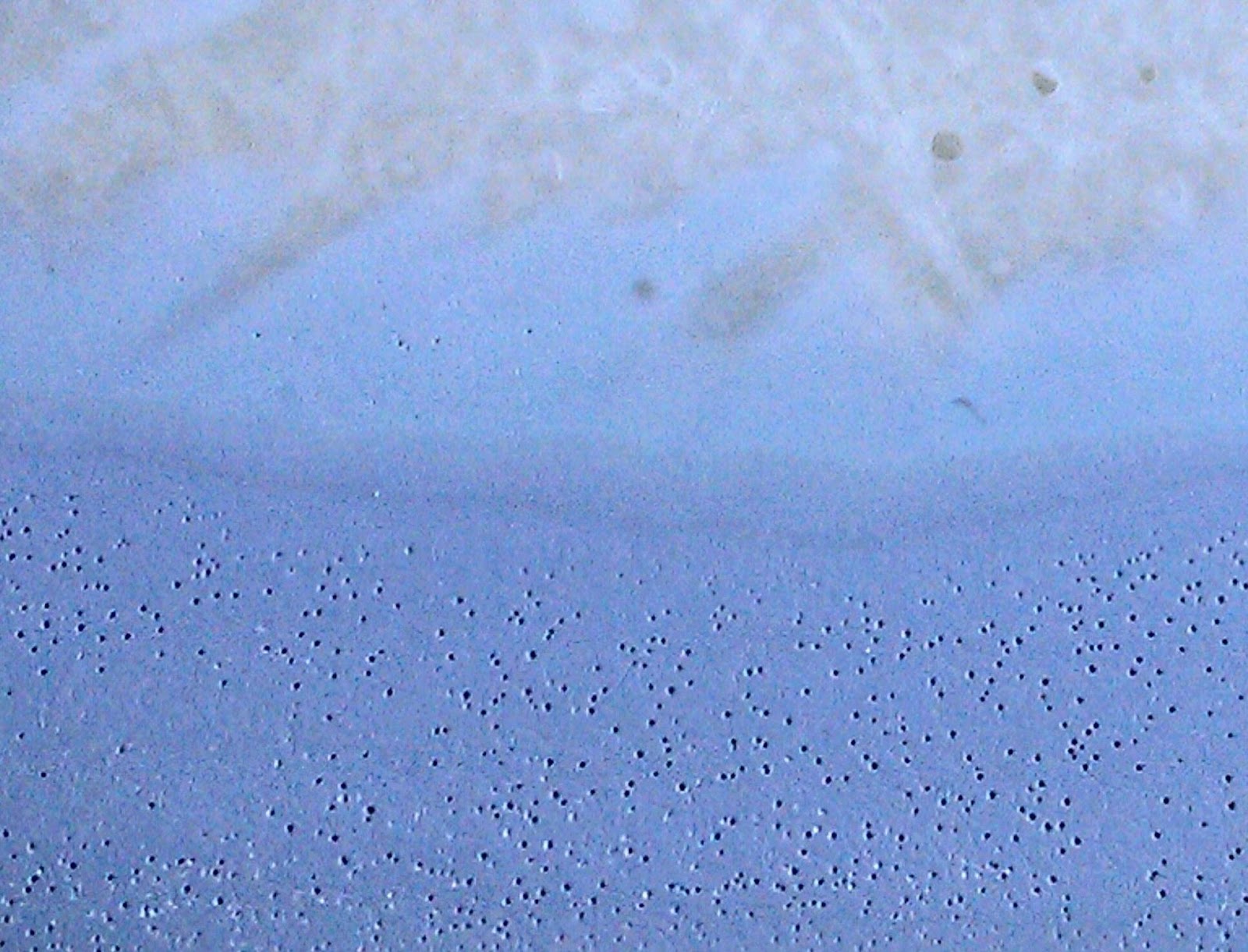 The gel coat on this particular lid seems to be total junk...

As soon as the top finish was gone and I started into the primer... the pinholes appeared...

...and penetrated a ways into the gel coat.

Luckily that ALL seems to be confined to the gel coat... which is the lighter blue colored area.

Where the cracking was the worst I took the gel coat clean off down to the fiberglass... which eliminated all those cracks. There seems to be no failure of the basic fiberglass itself, only a bad gel coat.

Thing is... THAT would have been clearly visible when it left the glass shop at Tsukayu and went to the paint shop to be primer painted. Either somebody didn't do his job or... company policy is screwin' the pooch (and the customer) just a bit.

Anyway, I finished taking off ALL of that grey layer, which is the primer... 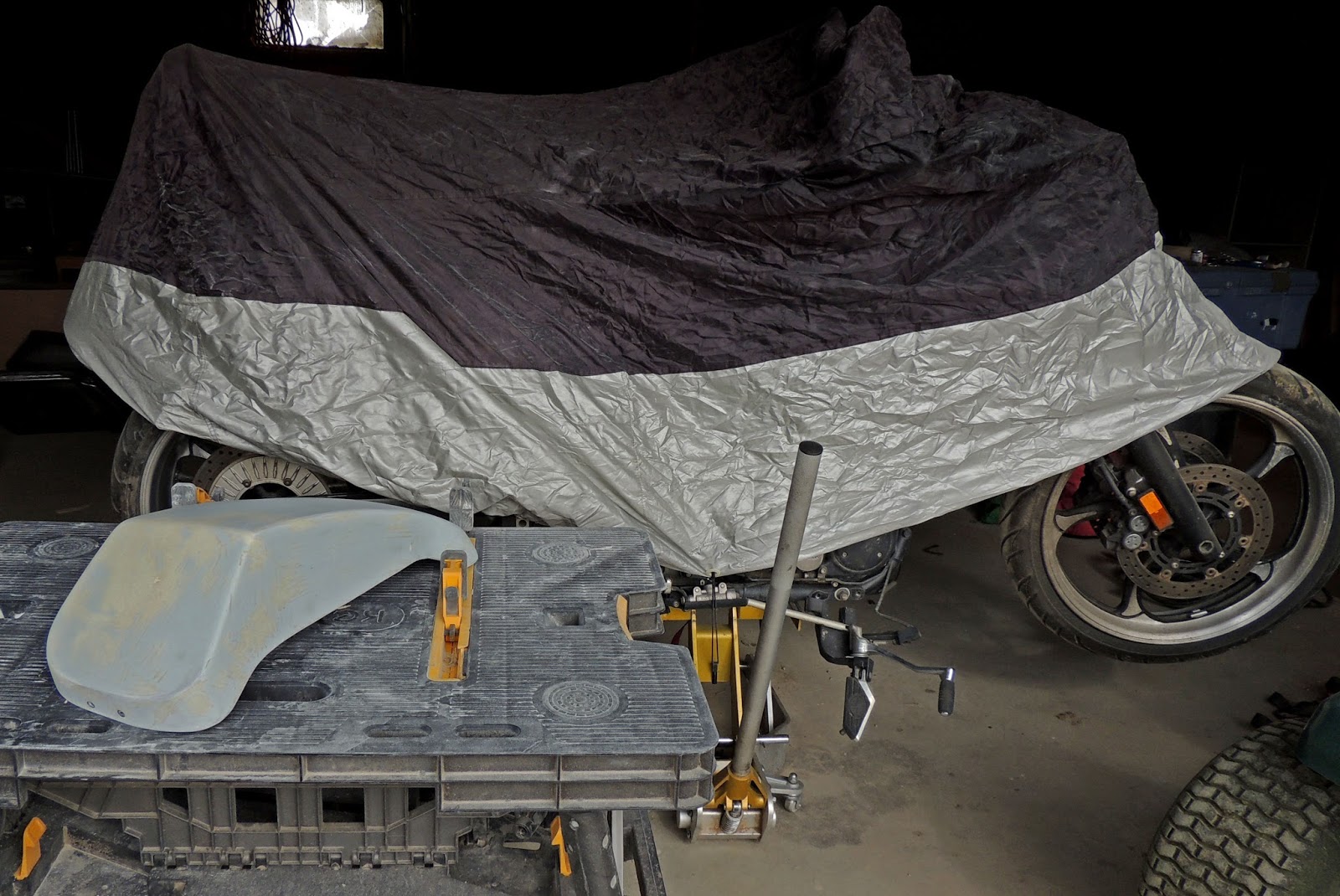 So now the damaged lid is ready to coat with a layer or two of resin to seal it up.

Then primer and repaint...

Along with repainting the other lid and two tubs.

And then get 'em all hung back on the bike.

Tsukayu warranty is only 6 months. So... a "Good" price is not so good... when you have a failure at about 18 months of age that they won't make right... Life in the west.

The scrubbing of the fins on the jugs is going slowly too... that west coast salt sea air might be good for your lungs... and a beautiful place to see... but it's hell on aluminum parts. :) That black oxidation on Aluminum is a piece of work to remove...

If I ever go back I'm going to have to find a way to coat or treat the exposed parts some way to resist that oxidation. Maybe a whole lot of carwashes and that "Protectant" spray. :)

All this work, has given my head the time required to turn itself inside out trying to conjure alternatives to what had been "the Plan"... I may just end up with a shined up scooter..

I tip my hat to your patience.

You've spent so many hours cleaning things up so far and many more are in your future I know.

Not sure I'd have the patience for it.

Sure will be shiny and race ready when it's done.