Sometimes When it Comes to Motorcycle Maintenance... Cheap Don't Pay

Sometimes a guy just walks along shakin' his head... He's walkin'... cuz the bozo is too cheap for his own good.

Got the forks torn down with very little trouble really. Turned out I needed to enlist a buddy with an impact wrench to provide enough "ooomph" to pop the bolts that hold the forks together. To get them back together I've got to fabricate a "Damper tube holder".

Not a big deal... just one of the "lil' details" nobody seems to mention in their "Easy Job" write ups. ;)

I also need to break down and pick up at least a cheapie impact wrench...

The MAIN obtructification standing in my way is that bit of mush that slops around between my ears. A couple of weeks back when I ordered the fork seals... I was trying to be frugal, conservative... penny wise... yeah lots of fine sounding words that mostly mean tight wad dumb ass to cheap for his own good! ;)

What I DIDN'T order were fresh bushings. Dumb move. When I got the forks apart it was clear and plain they were worn way to much to leave... so they've been ordered now and I wait again for new parts.

In the mean time I decided to make an "Old School" modification to protect those fork seals in the future. 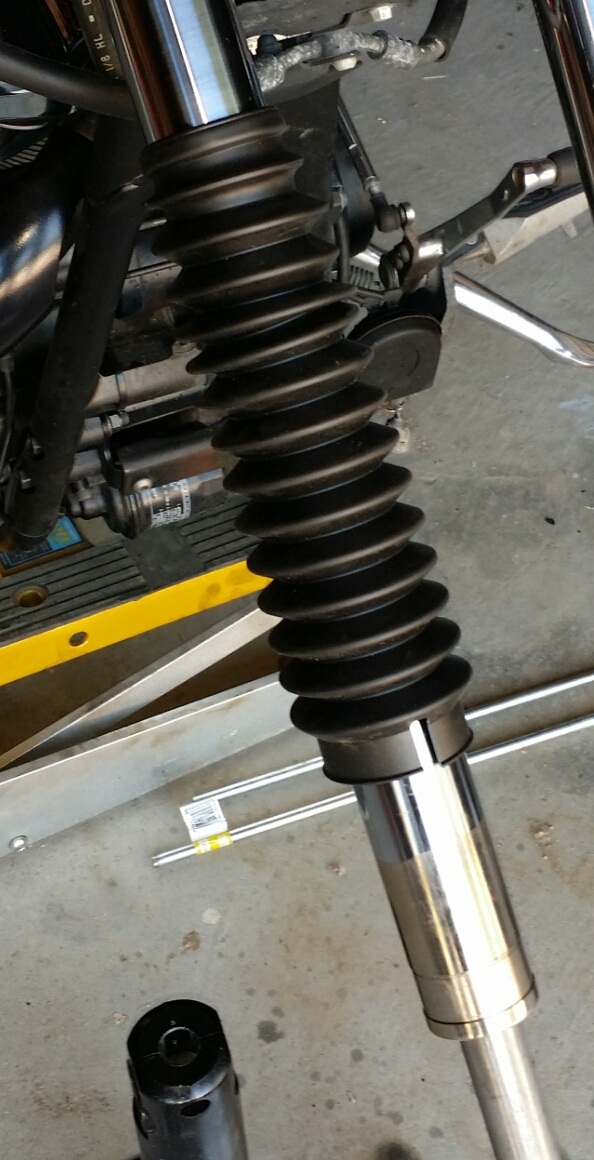 I started hunting around for fork boots.

Only... near as I can tell, Nobody builds any that fit the forks of a Yamaha Raider...

Most of my life, spent on the ranches, has been figgerin' ways to make what you HAVE, do the job you need it to do. So I've developed a pretty good ability to find new parts that were mistakenly believed to be something else!

Like Rancho Truck Shock Boots. Those aren't shock boots! Them there are Yamaha Raider Fork Boots! :)

Yup... their nice rubber boots fit like a freakin' glove. Takes a good bit of effort to get that skinny end started but once you do it fits like it was designed for the purpose.

I'll zip tie the ends with black ties (which will be nigh on to invisible) and dirt getting to the fork seals will not be a problem in the future!

Now I know... Rubber boots are not gonna appeal to folks that are all into chrome and polish, and I understand that, and that's fine.

But me? I'm into snoopin' around back roads. Signs that say "Pavement ends" don't turn me back like they tend to do for the spit and polish boys...

The only problem with that is, my ride tends to experience a bit more grit and grime than the average big red cruiser..

Grab Your Handles and Ride
Brian
Posted by Brian at 7:54 AM

Overcome, adapt, improvise.....and it sounds like you did it perfectly. Nicely done.

Damper tube holder? The Harley book said I needed one too. Just held it between my knees, while sitting on a Homer bucket and was good to go.

AHD; hmmm... me thinks I'm doin' it different? my upper/inner tubes remained in the trees. I only pulled the lower/outer tubes off. Inertia of the damper tube inside allowed the impact to spin the bolt loose "banging" it with repeated trigger pulls... but... when I reassemble... trying to torque to the specified 29#'s ... with that tube just spinning inside... How did you get to the torque rating?

Brian, I had to take my forks completely out. With the new Progressive dampers I just held the top end with my hand and torqued the screw with my other hand. It probably wasn't a pretty sight being bent and twisted, but it was effective.