The Music of Footpegs and Twisting Asphalt

Now... a cruiser, even one with the sheer grunt on tap of a Raider, can't hope to keep up with a sure 'nuff sport bike... but that don't mean they're pokin' along like some hobblin' cripple neither!

A few rides back I was feeling pretty fine, swingin' through the mountains... the bike leans over... scrrrruuuuuunnnnchiinnnng! Ha ha. You know... the sound that lil' gizmo under the foot pegs makes when you engage the automatic in-motion length adjuster? :)

Yeah... it always makes me giggle. Which is ok when I'm straddlin' the scooter solo. When the back seat is occupied... not so much.

It's become apparent to me that the music of scrapin' pegs don't appeal to some others like it does to me.

There's most generally a small bruise, a couple of inches above the bottom of my shoulder blade on the right side. It's amazing how close it resembles the lil' balled up fist of herself! ;)

SO... we were riding out of camp to find a BBQ supper last evening. Where the dirt track we're camped up meets the pavement there's a small slope where it meets the broken edge of the pavement. I'd crossed that earlier in the day without thinkin' about it. Riding Two Up... there was a fairly solid scrunch and a bump...

'tween that breakover and a low sittin' bike sittin' a bit lower with two up... there was a mite of a conflict...

When we got to the Hog Wild BBQ place in Cottonwood for supper... I got down to make sure I'd just tarnished the surface of the under frame and not cut any major arteries! ;) 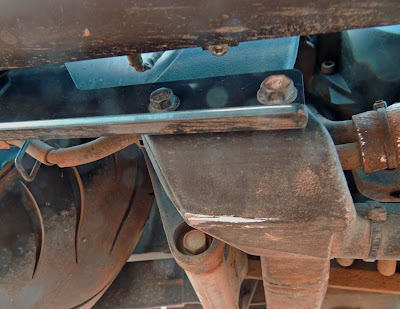 And that was all it was... just a new road blemish to add to the patina under the frame of a Yamaha Raider road bike! ;) buuuuut... up in front of that there WAS something that kinda caught my attention... 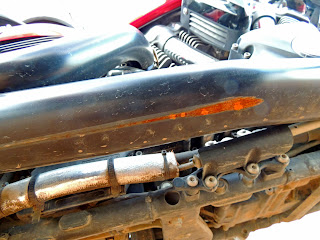 Apparently... those sounds I'd heard those few previous rides... before this last rain... weren't ALL the footpeg "lean" sensors getting shorter... :) Some of it was a bit of the Hide off of my Hard Chrome exhaust pipes... getting left behind! :)

I've kinda thought I'd been riding a lot more sedately in my aging years...

Guess not so much! HooYa!

What can I say... I are who I are and ever' once in a while ya just gotta let the tiger loose!

Grab Your Handles and Ride!
Brian
Posted by Brian at 9:44 AM

Troubadour's Triumph America had the same battle scars. He hit a dip in the road on a corner with me on the back and scraped the exhaust while chasing sport bikes on a ride to the coast one day. Good times!

He loved it, slight pucker moment for me on the back. The passenger gets tossed around over those bumps.